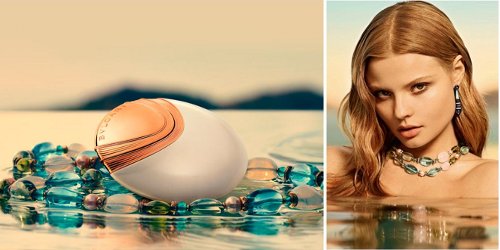 Bvlgari's new Aqva Divina was inspired by Botticelli's Birth of Venus and is "graced with the most sun-kissed wonders of the Mediterranean".1 Translation, as executed by perfumer Alberto Morillas: it's a "Floral - Solar - Watery" fragrance.

The start is appropriately dewy, with a "salty bergamot" note, although if you assumed such a thing would be light as air, think again — it doesn't feel heavy on skin, but it radiates farther than you might expect (a spray on a blotter could be smelled throughout the first floor of my house). The "pink ginger" in the opening adds a nice zing for the first few minutes, then it's rather subdued (my first thought was that an Aqva Divina Zenzero flanker could be sort of nice). We move on to "the gracefulness of magnolia" (I guess, although it's sheer and dewy enough that if they'd called it some other flower I would have accepted that too) and some "sunlit quince" (yes, there are vague fruity undertones adding a slight tartness to the heart notes). And then, "the voluptuousness of amber" (depends on what you mean by voluptuous, I suppose — we're talking a very sheer woody musky amber of the Eau des Merveilles sort) and beeswax (a dab, perhaps, smoothed over with a just-barely-there dusting of powder).

Verdict: Aqva Divina is a salty-musky skin scent with a few petals strewn on the shore and a smidgen of lemon cream, sort of like a morning version of Calvin Klein Reveal's "hazy Summer sunset". Bvlgari calls it watery (and the commercial is appropriately wet) but it's nothing like a traditional aquatic, and despite the reference to the goddess, to my mind, a man could easily get away with Aqva Divina.

As for me, I am impressed. I guess I'm a "lapsed fan" of Bvlgari, in that I adore several of their pre-2005 fragrances but have not loved the more recent output (although I have yet to try any of the Le Gemme series). I don't need a bottle of Aqva Divina, but it's quite well done (I'd wear it if that cute little 25 ml bottle, shown below left, fell from the sky) and easily my favorite recent fragrance from the brand. And if it turns out that salty-musky skin scents are the new thing, that would be just fine with me too — for a time, at least. 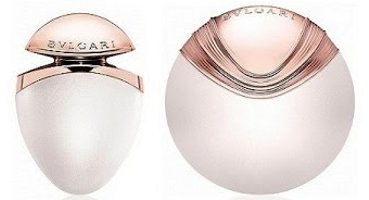 1. All quotes in first and second paragraphs are via the Bvlgari website.