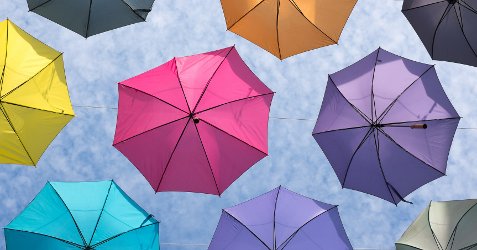 Last Friday I wrote about 5 pretty floral fragrances for spring. But spring, of course, isn't just about pretty flowers. Today, five somewhat quirkier / more offbeat takes on the season.1 Many of these suggestions came from reader comments, but do add any more that you can think of!

CB I Hate Perfume M#2 Black March: A fantastic fragrance that I've already included in 100 Fragrances Every Perfumista Should Try. The notes — rain drops, leaf buds, wet twigs, tree sap, bark, mossy earth and the faintest hint of spring — pretty much cover all the bases for early spring, and as such, expect a faint edge of melancholy along with all the rebirth and renewal.

Guerlain Après L’Ondée: Beautiful enough that it could have been included in the pretty spring florals, but wistful enough to fit better here. Après L’Ondée isn't really quirky, but it's not your standard sort of pretty, either (and like Black March, it's also in 100 Fragrances Every Perfumista Should Try). If it's too old-fashioned, try Frédéric Malle L'Eau d'Hiver instead.

The Different Company De Bachmakov: When I reviewed De Bachmakov, I noted that it was "supposed to evoke the winds of Asia and the sun hitting the forests of Siberia and buds pushing through the snow in the spring." That's just what it does, and those cold winds blowing over the last drifts of snow make this scent perfect for the sort of spring we're having this year, when the buds begin to bloom but the weather just refuses to warm up. De Bachmakov was done by perfumer Céline Ellena, and is easily my favorite of the 25 fragrances The Different Company has released so far.

Annick Goutal Folavril: Yes, it's discontinued, but it's still relatively easy to find, and it would seem a shame not to include it when we're posting this list right on April 1st. Jammy fruits and flowers transformed into something more playful than you'd expect by a bright fizzy opening and a bitter dose of greenery (tomato leaf). If you want something more straightforwardly pretty, Petite Cherie (or the likewise-discontinued Eau de Camille) might be perfect.

LesNez The Unicorn Spell: Violets, greenery and dirt under the last freak snowfall of the year, in a brilliant composition from perfumer Isabelle Doyen. If you want a more basic (but still lovely) violet, try her La Violette for Annick Goutal.

1. And I apologize for using Eliot's famous line from The Wasteland; none of these perfumes are about anything like despair and the line is overworked enough as it is. But I could not resist.

Note: top image is umbrellas [cropped] by rené something something at flickr; some rights reserved.