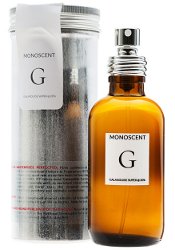 What We Do Is Secret will launch Monoscent G, a new fragrance consisting of the musk aromachemical Galaxolide Super.

What We Do Is Secret (aka Shaping Room), a New York-based creative studio responsible for the creation of the fragrances for S-Perfume® and A Lab on Fire®, is pleased to announce the launch of its own standalone product Monoscent™ G. Monoscent™ G consists of 20% Galaxolide® Super and 80% denatured alcohol (w/0.05% BHT).

MOLECULAR MASTERPIECE PERFECTED: First synthesized in 1965, Galaxolide ® by International Flavors & Fragrances (IFF) is one of the most frequently used raw materials both in functional and fine fragrances. In 2007, IFF introduced Galaxolide Super, a powered-up version of Galaxolide with an enriched chiral carbon center. More intense and floral than the original version, Galaxolide Super has slight powdery and animalic undertones.

GENUINE IFF: This is a denatured alcohol solution of Galaxolide Super manufactured at the factory of IFF in Hazlet, New Jersey.

The brand warns that about 29% of those tested are anosmic to Galaxolide.

What We Do Is Secret Monoscent G will be $75 for 60 ml, and will debut in January at Luckyscent.