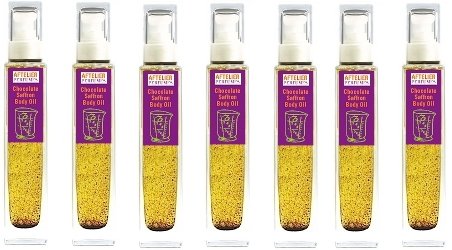 Call it a Christmas Miracle, but last week at a reading by Mandy Aftel at Cacao in Portland (Portlandia fans snicker here),1 I won a bottle of Aftelier Chocolate Saffron Body Oil and Hair Elixir in a raffle. A Cacao employee proffered a deep ceramic cylinder for Aftel to dig in for names. She grasped one card, but it slipped away. I held my breath. She grasped another and lifted it from the cylinder. It was me! Friends, this never happens. I had the choice of a chocolate parfum or the body oil. Fragrance is wonderful, and although the parfum would have made a delightful choice, let’s face it: daily body products are often more important than the occasional dab of perfume. Especially in winter, when skin can be so dry.

The Aftelier Chocolate Saffron Body Oil comes in a tall, rectangular glass 100 ml pump bottle with a cap. Its notes are chocolate, saffron and ylang ylang. Aftel says that it’s one of the oldest things she makes and continues to make. As she wrote in an email, “There’s something about the flatness of the chocolate and saffron with the creaminess of the ylang that felt so right.” (She also wisely warned to tip the bottle to and fro so that the chocolate bits that tend to settle at the bottom will mix with the oil.)

I knew I needed a moisturizing slather after my nightly bath, but I had a few burning concerns. First, would it be super greasy and leave a film on my sheets? My skin can soak up a lot of moisture, but I don’t want to have to run my sheets through the washer every other day. Next, would I smell like a banana split? And would that chocolate-y smell linger to interfere with the next day’s fragrance? I plan on burning through some particularly delectable perfumes this holiday season. The last thing I need is the stink of Hershey Bar competing with my last few drops of vintage Christian Dior Dioressence parfum.

It turns out that I needn’t have feared. The same night I won the body oil, right after my bath I liberally spread the oil over every moisture-starved inch of my skin, a pump or two per limb. The oil spread easily, and by the time I slipped between the sheets, it had absorbed enough not to transfer to fabric.

While I definitely smelled the oil’s chocolate, it smelled more earthy than foody to me. You know how the chocolate in a mole sauce loses its reference to cupcakes and becomes a team player in a greater taste experience? That’s what I feel the chocolate in the Chocolate Saffron Body Oil does here. Yes, I smell cocoa on my skin, but it doesn’t smell like a sweet ganache. Instead, the bare hint of saffron — no oyster-like saffron here, not nearly as much as in, say, L’Artisan Parfumeur Safran Troublant — and the wet, cold-creamy, floral presence of ylang ylang take most of the bon bon right out of the oil. Still, it is chocolate. And as such, it still feels comforting in that gourmand way.

When I don’t slather up with lotion during the winter, I can wake up with itchy skin. After a dose of the Chocolate Saffron oil, my skin has completely absorbed the oil by morning. It doesn’t feel dry, but neither does it feel oily. Best of all, the scent has vanished. As much as I loved the earthy, comforting fragrance the evening before, I’m ready to start most days with a blank slate.

1. If you don’t know what I’m talking about, and you have a wacky streak and tolerance for slightly sexual joking around, search YouTube for “Portlandia Cacao.”