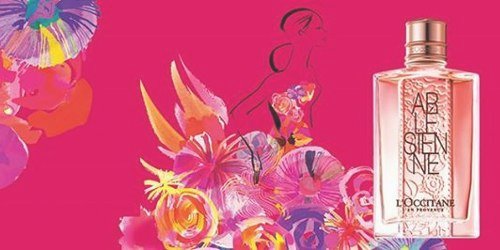 L'Occitane's new Arlésienne is the brand's first pillar fragrance for women in a good long while (they've been occupied with La Collection de Grasse and limited editions and whatnot). It reportedly celebrates the women of Arles in Provence, and draws inspiration from traditional Arlésienne dress and the Venus of Arles; it was introduced in conjunction with a Christian Lacroix exhibit, L’Arlésienne, at the Chapelle de la Charité.

The opening of the Eau de Toilette is fruity and tart (rhubarb, maybe?) and vivid — it's a happy fragrance, and even happier on a paper blotter, where the top notes linger and a whiff of pale leafy green is more obvious. On skin, the tang of the top notes is over too soon, then Arlésienne is a modern cosmetic-powder floral, mid-weight, with a touch of saffron and a bit of a peppery bite. The emphasis is on the rose, but the rose is not so dominant that you'd smell it and classify it as a rose fragrance, which is just as well since L'Occitane has plenty of rose fragrances already (the notes for Arlésienne: saffron, mandarin, rose, lily of the valley, violet, tonka bean and sandalwood). The base is pale woods, ever-so-slightly earthy, not particularly sweet (or at least, less sweet than many modern cosmetic-powder florals).

The lasting power is decent enough for an Eau de Toilette, but I would not expect it to make it through your work day without another spritz.

Verdict: Arlésienne is romantic and feminine, and a good fit with L'Occitane's holiday advertising. It's not perfumista bait, really, but it's very pretty. I would call it a spring fragrance; its impressive range of cheerfully-packaged and highly giftable ancillary products perhaps explains why it's launching now. Next time I'm in the mall I will be testing the body oil (below left) and hand cream (below second from right).

Tomorrow I'll have a giveaway with the Eau de Toilette, Solid Perfume, Beauty Milk and Candle.