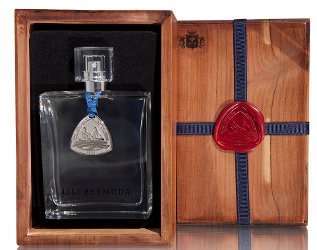 Lili Bermuda will launch Mary Celestia, a new limited edition fragrance based on a old Piesse and Lubin London scent recovered from the shipwreck of the Mary Celestia, a blockade runner during the American Civil War. The Mary Celestia was shipwrecked in 1864, and 1864 bottles of the new perfume will be released.

A luxury perfume originally created in the 1800’s, and hidden mischievously in a Bermuda shipwreck for 150 years, is now available to purchase after a meticulous, first-of-its-kind re-creation process.

[...] In September 1864, exactly 150 years ago, the Mary Celestia, a Civil War Blockade Runner sailing to Charleston, South Carolina, sank off the south shore of Bermuda.

An international team of Marine Archeologists discovered a well-hidden cargo of perfume bottles in the ship’s bow in 2011, after a Bermuda storm blew through and shifted the wreck. The intact bottles were embossed Piesse and Lubin London, signifying they came from a now defunct perfume house on Bond Street in London. It was a place sought after by the world’s elite and its perfumer, G.W. Septimus Piesse, who wrote the first book on modern fragrance-making in 1857 called The Art of Perfumery.

[...] drom fragrances conducted an exhaustive scientific analysis of the ancient perfume and the results were used to re-create the fragrance as if Piesse was in his studio today.

Jean-Claude Delville, drom’s perfumer, said: “In perfumery, opportunities like this don’t come along too often. Opening the bottles was like going back in time 150 years. I was shocked at how fresh and floral it was and the amount of citrus in it. We analyzed and captured the unique spirit of the original fragrance and thus re-created a lost treasure.”

The fresh fragrance opens with the smell of sparkling grapefruit and zesty citrus. The scent of rosewood is complimented by warm amber tones. Finally the soft notes of rose and orange flower impart timeless elegance.

Lili Bermuda Mary Celestia will be $224, size and concentration unknown. A portion of the proceeds will go to a foundation to preserve and promote Bermuda’s shipwreck heritage.