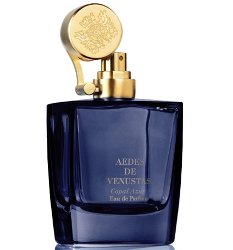 Aedes de Venustas Copal Azur will be available in 100 ml Eau de Parfum or in a purse spray with three 10 ml refills.

The Muse: Copal, the Mayan incense
Strikingly similar to frankincense, copal, whose name means “incense” in Nahuatl, can be extracted from a variety of trees native to Central and South America. And much like frankincense in Ancient Egypt or Greece, it was burned by the Mayans and Aztecs to “feed” the gods. Today, it is still used in Mexico for spiritual purposes. Karl Bradl was drawn to its scent while cycling on the coast of the Yucatán Peninsula through copal-laced air towards the natural reserve of Sian Ka’an, which translates as “Gate to Heaven”. The suave cloud of burning copal whirling over Tulum's bohemian and eco-chic outdoor locales at the foot of an ancient Maya walled city, confirmed his inspiration for Copal Azur.

The Scent: Copal Azur
Just as the Mayan citadel looms over Tulum’s lush beachside paradise, a steep, mineral cliff of incense dominates the olfactory landscape of Copal Azur. Since copal resin cannot be used as a perfume ingredient, three different extractions of frankincense are used to conjure it from top to base notes, making up an extravagant 30% of the formula.

The vibrant hues of the Mayan Riviera filter through milky, pine-scented wreaths of burning resin. Blue, for the Caribbean Sea and the limpid depth of the cenotes, the subterranean fresh-water pools that riddle Yucatan: a cool breeze of ozonic and salty notes. Green, for the lush Mexican jungles: a flash of cardamom glinting in the moist, woody undergrowth of patchouli and myrrh. White, for the purest quality of copal and the pristine beaches of Tulum: a lick of almond-scented tonka bean smoothed into creamy notes. Amber for the Jaguar God of Terrestrial Fire – the fire that burns the sacred copal… Hypnotic, spiritual and forceful, Copal Azur might well indeed open the “Gate to Heaven”.