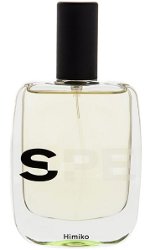 Himiko (shown) ~ Developed by perfumer Carlos Benaïm. "This S-Perfume fragrance was inspired by the enigmatic shaman Queen Himiko of Ancient Japan, whose mysterious life was kept secret with little to no information recorded. This scent is a sensual and carnal interpretation of this historic female icon." With pimento berries, mango, birch wood, cedar, plum and incense.

Musk S ~ Developed by perfumer Carlos Benaïm. "The concept behind this S-Perfume fragrance originates from the brand's very first scent created by master perfumer Alberto Morillas in 1997. The idea of sheer, skin musk was tweaked a few times since then, and Musk S is the latest, most refined version." With Japanese chestnut flower, musk, vanilla and white amber.

1499 ~ "This S-Perfume fragrance pays homage to the 1499 masterpiece, La Pietà, one of the most admired sculptures of all time created by the young Michelangelo. This is a sensual, mystical and spiritual scent exuding the sweet aroma of jasmine sambac." With jasmine sambac, myrrh, ciste, olibanum, vanilla and amber.

Kamakura ~ "This S-Perfume fragrance was inspired by the Kamakura province in Japan - the birthplace of the samurai culture and Japan’s capital during the Shogunate period. This scent features woody notes reminiscent of Zen temples and meditation gardens that can still be found in the spiritual region of Kamakura." With neroli, mate, vetiver, cedar, sandalwood and incense.