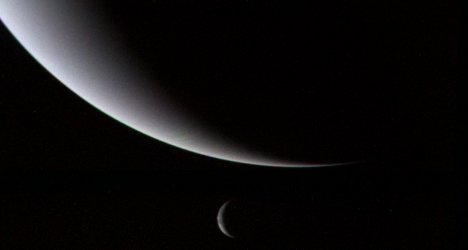 I wrote about the Seattle-based business Blackbird last winter, when I posted a review of their incense cones (which are still favorites of mine). At the time, none of their personal fragrances really captured my fancy; the names were memorable and provocative (Tinderbox, Pipe Bomb), but the actual scents just didn't fit my personal taste. But you just never know: Triton is the latest release from Blackbird, and I've been happily wearing my sample for the past few days.

Triton includes notes of violet leaf, iris root, cedar, aldehyde, incense, mimosa, carrot seed, dry amber, vetiver, styrax and black pepper. It was "named after the moon of Neptune that was in turn named after the son of Poseidon," and "its scent carries the nose to the icy surface of its namesake moon. . . . It’s about finding and relishing the beauty of a frozen landscape." It's a tricky fragrance to classify: I'd call it a unisex mineral-earthy-woody scent.

I've been wearing Triton in hot-and-humid weather, and it does make me feel cooler (mentally, at least) while taking me on a voyage. It balances chilly aldehydes with warmer, more textured base notes. The aspects that feel most prominent to me are a dry, sheer incense in the opening, a moist, root-y iris and a cedar note reminiscent of pencil shavings. (I particularly enjoy the iris.) I can imagine the smoke and dirt and colder notes as part of a moonscape experience. Yet Triton also reminds me, in a weirdly soothing way, of a cellar: slightly clammy air, damp earth, chilly stone and the musty smell of wood furniture that has been stored in the dark for a while.

Triton is reportedly about half-and-half natural extracts, which adds to its convincing "elemental" sensation. Its longevity is on the light side as a result, but I still got a respectable few hours from it on my skin. It could easily be worn by women who like light earthy fragrances as well as men.

Thinking about Triton's back-story, I'm surprised that more perfumers haven't released scents inspired by celestial bodies — or have they? I love this idea, and I wish I'd purchased a Cire Trudon Odeur de Lune candle when I had the chance (it's now discontinued). Triton is an affordable and cool way to take an olfactory moon-walk, and it's well worth trying.

Blackbird Triton Eau de Parfum sells for $38 (for a 10 ml roll-on) via the Blackbird website. Sample packs are also available.

Note: top image of Neptune and Triton [cropped] via NASA.