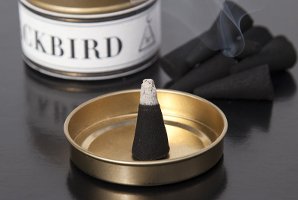 The summer I turned seventeen, I had a new friend who liked to scent her room with incense sticks and cones, which she burned in an assortment of small pottery vessels that she had crafted in a ceramics class. I was impressed by her bohemian style — she also had wonderfully eclectic taste in clothing and music — and I soon adopted the incense-burning ritual for myself, at home and then in my college dorm room.

The incense we used in those days was run-of-the-mill stuff purchased at record stores or from street vendors, either heavy and harsh with synthetic sandalwood or sickly-sweet with fruit scents or soapy lavender fragrance. I later made the switch to candles, and I haven't used incense cones for longer than I can remember. When I found out about the Blackbird Incense line, I remembered my teen years (and my strongly scented dorm rooms) with fondness, but I wasn't sure whether I could pick up the incense habit again.

Blackbird is a Seattle-based business, currently offering accessories and toiletries in addition to its namesake incense collection, with an industrial/rustic, modern/gothic aesthetic. I like the way their incense cones are packaged, in hand-labeled metal tins, and I like the scents I've tried so far. They tend towards the earthy and dark side of the fragrance spectrum, and they're definitely more sophisticated than the cheapie cones that were my introduction to incense.

Izba, for example, is a "woody lavender," with an emphasis on the "woody" part. It actually smells like a burning fire, with an almost meaty pungency. An izba is a traditional type of Russian peasant cottage, and you can imagine yourself sitting inside one of these little houses on a cold night, warming yourself at the smoking fireplace.

Nahk is a "spicy leather," named with the Estonian word for leather. It has an intense, almost dirty leather fragrance with a rubber-tire note; I've never tried a leathery home fragrance before, but on a cold night, this one is oddly appealing.

Ozo has notes of rose, sandalwood, and anise seed, and its name was inspired by "Rozo," the Esperanto word for "rose." According to Blackbird, it "may also be used to replace negative energy with an air of hope." Sounds good to me! Ozo gives off a feminine tea rose scent, but the licorice-like anise note is also noticeable. (If this were a perfume, I'd wear it.)

Hibernus caught my interest because its name means "winter" in Latin, and because I've never come across a wintergreen incense before. This seems to be one of the lighter incense scents in this line: its minty heart is combined with a hint of honey and quite a bit of resin. It works nicely for combating cooking smells or anything else that calls for a little atmospheric freshening.

Roheline (Estonian for "green") is another herbal scent, with a different emphasis: this is a garden-like blend, with tomato leaves and bitter ferns over an earthy base. I can imagine using this one year-round, even in summer when some of the others (like Izba or Nahk) might feel too dense.

The five other scents in the Blackbird Incense collection are Ai (mossy geranium), Blood Countess (sweet resin), Muru (earthen roots), Sepulchre (herbal floral), and Sofia (green amber with violet). I'll be trying a few of them soon. Come to think of it, I've revived and refined more than a few of my late-teen tastes over the years; it's not surprising that I've come back to incense cones in this way.

Blackbird Incense sells for $28 for a tin of 20 cones, or $3 for two sample cones of the same scent. A sample set with 2 cones of each of the lines's 10 scents is also offered for $30. Additional information is available at the Blackbird website.