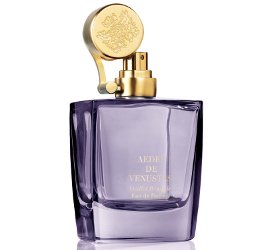 A rose that wants to be a carnation, set ablaze by an exotic spice explosion. Red petals turned black by frankincense. AEDES DE VENUSTAS’ third scent is a fierce, fiery, feral flower.

[...] Though it bears the French name for carnation, the “Bengale OEillet” is actually a variety of China rose, Rosa Indica caryophyllea, bred by the floral painter and botanist Pierre Joseph Redouté (1759-1840). When he found it while leafing through Redouté’s 1824 book of botanical prints Les Roses, Karl Bradl was seduced by the shape-shifting blossom. It is the ambivalent name and appearance of the Bengale OEillet rather than its scent that inspires the third AEDES DE VENUSTAS offering.

When it hijacked the carnation’s name, the rose was playing with fire. Carnation is a flamboyant retro charmer that borrows facets from rose and ylang-ylang. But it has a volatile personality. Add explosive exotic spices to it powdery scent and you’ll start a chain reaction.

A bright, peppery bergamot sends off the first sparks. An incense stick sets the scent ablaze. Driven into the heart of OEillet Bengale, it binds the citrusy top notes to the sweet resinous base, acting as the flower’s stem. Or is it the gunpowder-coated metal rod of a Bengal fire?

Black pepper, cinnamon, cardamom, clove, saffron, and an unusual lash of citrusy, herbaceous, gingery turmeric… Spicy fireworks turn the red blossom black. Once they’ve subsided into a slow burn, it emerges to blow a glamorous, strawberry-flavored lipstick kiss. Serrated petals like tiny teeth : being from Bengal, this reincarnated rose is also a tiger, clawing its way into the amber base with animal white pepper. It is then that, tamed by sweet balsams – vanilla, tolu, benzoin and labdanum –, OEillet Bengale curls up with a languid purr.