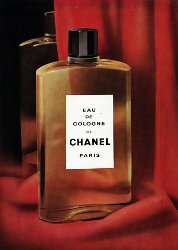 Allison sat on the couch and opened a plastic bag full of odds and ends. As she sorted its contents, she told me, “My dad said he found some of my grandma’s perfume. It should be in here somewhere.”

Allison’s Grandma Florine had been born Myrtle Florine Heffington in Bee Cave, Texas, in 1922. She hated the name Myrtle and dropped it as soon as she could. She picked up her husband’s last name, Norman, when she married at 17.

I’d heard stories about Grandma Florine. Allison and I once both worked for the same vintage clothing store, and many of the stories had to do with Florine’s wardrobe: size five gold lamé Spring-O-Lator mules with mink trim; a black and white polka dot jumpsuit from the 1960s; a full-skirted maroon velvet dress with bows on the sleeve; filmy peignoirs. Photos show Florine more sedately dressed, but nicely turned out. In one photo, she sits at a picnic table looking tiny and composed, every hair in its place. In another, Florine stands proudly next to Allison on a California sidewalk. Her slacks are ironed with a crease, and she wears a crisp white blouse.

Florine spent much of her life moving around the country as her husband chased work. In later years, after her husband died, she moved into an apartment in San Luis Obispo. “She was a tiny dynamo,” Allison says of her grandmother. “She made my aunt’s prom dresses, baked cakes, painted china, and wrote with beautiful penmanship.” Her Puss ‘n Boots cookie jar was always full for Allison and her sister. Florine’s best friend, Joan, a big-boned blond who liked leopard print, might stop by.

Grandma Florine’s name for Allison was “princess,” and she called Allison’s sister “glamour puss.” Even when her fingers were crippled with arthritis, she would French braid Allison’s hair. “She would look at us, and her face would just beam,” Allison says.

For all her joyful living, Florine never had much money. She gave up her car later in life and told people she didn’t care to drive anymore. Years later, Allison discovered her grandmother didn’t have the money for auto insurance but was too proud to admit it.

In 1990, Grandma Florine fell ill. Allison, now living in San Francisco, kept the phone by her bed, fearing the inevitable call. When it rang one morning before sunrise, she knew Grandma Florine had died. Later that day, earthquakes trembled through the city.

At last, Allison pulled three bubble-wrapped packages from the bag on her lap. What perfume told Grandma Florine’s story? I unrolled the wrap from the first bottle. It was a small Chanel No. 5 Eau de Cologne, about a fifth full. The bottle hadn’t been opened in 25 years, but I wouldn’t be surprised if it had been purchased 10 years before that. The next package held a small gold-tone atomizer of Lanvin Arpège, and the third a 30-ml splash bottle of a powdery floral from an anonymous drugstore brand.

It fit. All these fragrances were feminine and elegant, and when Florine bought them, the No. 5 and Arpège were top shelf at the drugstore — although the least expensive versions of them. Moneyed or not, Grandma Florine was a class act.

Have you ever thought about what your perfume says about you?