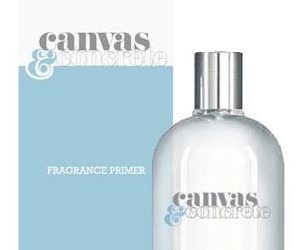 Canvas & Concrete: Is it a new Comme des Garçons fragrance? The recipe for a DIY bomb shelter? No, Canvas & Concrete is a fragrance primer designed so that “scent will not mix with your ph or body funk” and “the scent is true to what you smelled in store or in a magazine and what the designer intended.” All over the product’s box and website is splashed “lasts all night.”

I’d like to believe I’m reasonably funk-free, and I prefer my fragrances to smell like they came from a bottle and not a magazine’s scent strip. Plus, at night when Canvas & Concrete purports to be doing its major work, I’m normally sleeping. But I do wear perfume during the day, and I was eager to give Canvas & Concrete a try. I love reapplying fragrance — a different fragrance, usually — after the office and when I’m home, but some of my favorite scents vanish well before lunch. Could Canvas & Concrete work for them?

My first fragrance primer experiment was with a 1970s Christian Dior Miss Dior Eau de Toilette. This version goes on like a symphonic orchestra of moss, fecal leather, sparkling green, and white flowers, but when it fades it’s as if someone turned the orchestral broadcast off with a click of the dial. One minute, it’s full and luscious, and the next minute — kaput.

I applied two sprays of Canvas & Concrete on one forearm, waited ten or so seconds for it to dry, then sprayed two of Miss Dior over it and another two sprays on my other, unprimed forearm. Yes, the Miss Dior on the primed forearm did persist another three hours or so longer than the untreated arm, but what really interested me is how the primer slowed down the fragrance’s development. Normally, this particular Miss Dior wastes no time going to castoreum land (I swear the funk is Miss Dior and not me, despite what Canvas & Concrete implies), but with the primer Miss Dior stayed in balance as it wore. The perfume’s castoreum was definitely there, but it hung back and dissipated slowly.

Thursday morning I had acupuncture, so I didn’t want to go too wild with perfume. I thought a simple dab of extrait would do, but somehow I ended up with a bottle of Rochas Femme parfum in my hand. (It was about a thousand times more glamorous than the eucalyptus massage oil that wafted through the treatment space, but my acupuncturist is a good sport.) Here again, by lunch time the Femme on the untreated wrist had melted into a whisper of oily sandalwood, but on the treated wrist its heart of cumin and peach still lingered.

Finally, I put Canvas & Concrete to the big test: DelRae Mythique. I’m mad about Mythique, but it has just about no sillage and lasts at best a few hours on my skin. I sprayed the primer on one forearm, then doused both forearms with Mythique. Canvas & Concrete didn’t do anything about Mythique’s meager sillage, but it did slow the fragrance down, and I could actually still smell its suede and iris (quietly) a full eight hours later, about four hours after the perfume on the other arm had disappeared.

So, is it worth it? Canvas & Concrete is $19.50 for a 100 ml bottle. Not bad at all. Still, I have gallons of fragrance. I don’t mind reapplying scent, I don’t go in for a lot of beauty products, and I enjoy choosing a fragrance that blends with my chemistry. Yet I'm intrigued by how Canvas & Concrete rebalanced my vintage Miss Dior, and I could see using it with perfumes that plunge headlong into their base notes (hello Bal à Versailles). Plus, if you have a signature scent, you might value having something that slows the perfume's development and stretches it a few hours longer. If you live in fear of using up a particular discontinued fragrance, you might like to try Canvas & Concrete, too.