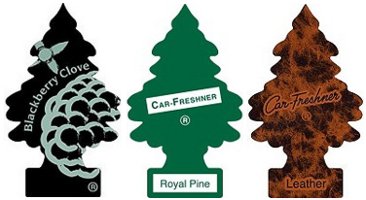 Last week I stopped by an auto parts store to pick up wiper blades and halted in front of the car air freshener display. I’ve always had a weakness for the scented trees that dangle from a car’s rearview mirror. They’re so trashy, yet so classic, that — in my mind, at least — they pack serious chic. I bought five different Little Trees to review.

First, some Little Tree history: Car-Freshner Little Trees (“the Global Leader in Automotive Air Fresheners”) were developed in 1952 in Watertown, New York, by perfumer and chemist Julius Sämann. In Ireland, a Little Tree is called a Magic Tree. In France, Italy, and Portugal it’s an Arbre Magique, and it’s a Wunder-Baum in Germany. Car-Freshner defends its Little Tree vigorously and has the lawsuits to prove it. Don’t even think of using the Little Tree image as part of the logo for your new hipster carwash / craft cocktail lounge.

Each Little Tree comes sealed in plastic. The package recommends you snip the top of the package and ease the Little Tree out about three-quarters of an inch a week for seven weeks of aroma. The package concludes with the advice to “hang freely!”.

Now for the air fresheners:

Royal Pine: This is the classic. If you’ve only experienced one Little Tree in your life, it was probably an Astroturf-green Royal Pine Little Tree. It smells of rich, sappy, sugary pine. A side-by-side comparison with Pinesol shows Royal Pine to be sweeter and less ammoniated. I wouldn’t want it as a bath oil, but it’s just fine for the car. My Royal Pine Little Tree will find a home under my kitchen sink.

New Car: Also a classic, and my favorite of the bunch. To me, New Car smells like suede, ylang ylang, the residue of lavender-scented cleaning spray (which generally smells more like rose than lavender), with a dash of ashtray. It’s a fascinating composition, but I doubt it smells anything like a new car. That said, my car is 27 years old, so I’m no judge.

Black Ice: Black ice? Really? What could something named after ice smell like? “It smells strong, like cologne. Like Drakkar Noir or something,” the guy at the auto parts store said. “It’s really popular.” He nailed it. Black Ice is a generic fougère featuring more lime than lavender. Frankly, Drakkar Noir is more interesting.

Leather: When I saw leather-scented Little Trees, I congratulated myself. Here was undoubtedly the cheap thrill of the year. For $2.99, my pickup truck would smell like Knize Ten for months to come. Well, the joke was on me. The tree’s black and brown leatherette pattern should have clued me in. I’ve scoured my fragrance vocabulary to try to describe its scent, but I’m stumped, except to say that it doesn’t even hint at leather — the New Car Little Tree smells more like leather than this one does. Finally, first thing this morning I stumbled to the kitchen to make coffee and encountered the fusty scent of rotting food. As I dumped the compost and emptied the trash, it hit me: this was the smell of the Leather Little Tree.

Blackberry Clove: “Our most popular air freshener by far,” the auto parts guy told me. “It’s not bad, really.” Blackberry Clove smells like blackberry-black cherry sorbet cleanser. Its clove is subtle to nonexistent. I’m not big on ambient fruit-scented fragrance, but a 14-year old with an odor problem would love this one.

When I asked the auto parts guy which of the air fresheners was his favorite, he knelt to pluck a spray vial of Ozium off the rack. “I like this one. It doesn’t smell like anything.”

The air fresheners I bought come in packages of three (“3 pak” in Car-Freshner speak) for $2.99, but you can also buy them in packages of six, in singles, or as a spray. The Car-Freshner website1 shows an almost frightening range of fragrances, including many named after tropical fruit or cocktails; three vanillas (including Vanilla Pride, which has stars and stripes on it); and some “mood” scents, including Energy, Relax, and Fresh Surge. (Warning: after a few hours of nose-to-tree testing, the tip of my tongue turned numb.)

Are you a Little Tree fan? How do you freshen your car?

1. While you’re visiting the website, be sure to click on the Submit a Story link and check out the stories users sent in. I especially recommend Jake G.’s testimony for his Black Ice freshener. The man has a gift for narrative.