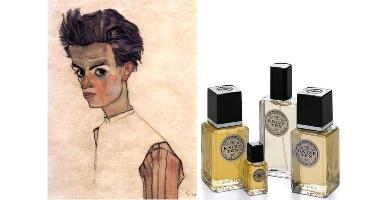 I bought my first bottle of the Knize Ten during a particularly long (and chilly) wet season in Los Angeles, and I remember walking to and from work for weeks — wearing Knize Ten —  on streets lined with blooming jacaranda trees, their strongly perfumed blue flowers drenched with rain. Today, in Seattle, rain isn’t rare as it was in usually parched and sunny L.A., but Knize Ten still blends well with cool, stormy weather.

The Viennese clothing firm Knize has been around since 1858, and it introduced its first fragrance, Knize Ten, in 1924. (Knize used images of polo players in its advertising, and “ten” is the highest handicap in polo.) There’s no doubt Knize Ten has been through some reformulations* in the last 86 years (its leather and musk notes have been softened considerably since I wore it 15 years ago), but it still possesses a crisp, “classic” vibe; it’s a debonair, spicy-floral leather fragrance.

Knize Ten opens with strong, “candied” petitgrain and dusty orris (and there’s an undercurrent of “cool” carnation-clove and cinnamon notes that doesn't take the perfume into gourmand territory).  In mid-development, cinnamon oil provides a smooth and interesting transition to a birch tar (leather) note. The leather phase of Knize Ten lasts longest; under the dominant leather note I smell subtle orange blossom, clove and ambergris-musk.  To me, Knize Ten isn’t “sporty” so much as frisky and jaunty. It's a strange creation: a refreshing leather perfume.

How many men’s fragrances of the early 20th century are still around today (and still smell good)? Not many. If you love cinnamon-clove-carnation in perfume or if you prefer your leather scents to be subtle and ‘icy’ rather than forceful and warm, give Knize Ten a try.

Knize Ten was developed by perfumers François Coty and Vincent Roubert. It has very good lasting power and sillage. It's available in Eau de Toilette and matching grooming products, and it’s often found at online discounters. For buying information, see the listing for Knize under Perfume Houses.