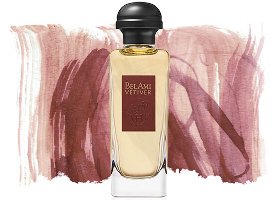 The other classic fragrances in the series will include Eau d'Hermès, Calèche, Equipage, Amazone, Rocabar, Hiris and Rouge.

Hermès Bel Ami Vétiver is available in 100 ml Eau de Toilette. It can be found now at Hermès in France, €90, and is expected to go into wider distribution next year.