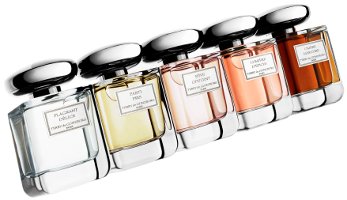 If you're a fan of high-end, luxury cosmetics, you've most likely heard of Terry de Gunzburg: makeup artist to photographers like Helmut Newton and Irving Penn, creative director of Yves Saint Laurent Beauté (and inventor of the Touche Eclat highlighter-concealer), founder of the eponymous By Terry makeup line. Gunzburg launched her first fragrance collection last year, and it recently arrived in the United States.

Gunzburg has said, “I wanted to reconnect with perfumes from the beginning of the century, like those of Guerlain and Robert Piguet — they were extravagant experiences. That’s not to say mine are dusty old fragrances. They’re contemporary — clean but not watery, opulent but not heavy.”1 I've been sampling her five fragrances one by one; today I'll cover two of them, Parti Pris and Ombre Mercure.

Parti Pris includes notes of tuberose, orange blossom, Turkish rose, ylang ylang, vetiver, sandalwood, vanilla, tolu balsam, Turkish tobacco absolute, rockrose and labdanum; it is described as "a colourful scent with a passionate temperament that dislikes shades of grey and encourages emotion." I'd actually describe it as "gracious" and "polished" rather than "colourful" and "passionate." After a slightly bitter citrus note in its initial phase, Parti Pris blooms with a creamy-sweet tuberose. It's certainly not a big, dramatic tuberose; if you're devoted to Serge Lutens Tubéreuse Criminelle or to the iconic Piguet Fracas, you'll find Parti Pris a bit reserved for your taste. The rest of the fragrance is a cascade of silky white petals (ylang ylang, rose, something like freesia?), resolving in a dry down of very gentle vetiver with a drop of vanilla. Parti Pris is very feminine, like a classic ivory silk blouse. It could be enjoyed nearly year-round, in many different situations.

Ombre Mercure is both literally and figuratively darker than Parti Pris, and it's my current favorite from Terry de Gunzburg's "haute parfumerie" collection. It is "a fatal attraction between mystery and refinement...intense, powerful and purring on the skin just like a feline," with notes of iris, rose, ylang ylang, violet, jasmine, patchouli, vanilla and benzoin. If you like your irises powdery and oriental, you're in for a treat. Ombre Mercure is velvety and rich (yet not overwhelmingly so), and its rooty-sweet iris is interwoven beautifully with the other dusky floral notes, the woodsy patchouli, and the honeyed vanilla. No one note dominates, yet it still feels like an iris fragrance overall.

Thanks to its deep and spicy notes, Ombre Mercure has even better staying power than Parti Pris. It's somewhat less versatile — I can't imagine wearing it in hot weather, or in most workplaces — but its vintage-y feel does appeal more to me. And another reason that Ombre Mercure caught and held my affection, although it took me a little while to figure this out: it reminds me strongly of L'Artisan Parfumeur Orchidée Blanche (discontinued, alas!), minus the sharp green-rooty opening and with a little extra patchouli. (If you never had the chance to try Orchidée Blanche, do read Victoria's review on Bois de Jasmin or Marina's review at Perfume Smellin' Things.)

Everything old is new again, with a twist; Terry de Gunzburg may have been thinking of Guerlain and Piguet, but she also admires Serge Lutens; I might be reminded of L'Artisan, and others, as I continue to try these perfumes. If you've already sampled them, do feel free to share your thoughts in the comments.

1. Via Interview, A Kind of Magic at Harrods Magazine, December 2012.