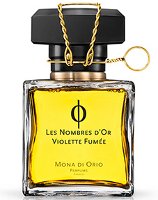 It’s easy to mistakenly pigeonhole violet. When I think of violet, my thoughts first go to retro rose-violet concoctions like Frédéric Malle Lipstick Rose or violet as sweet as the candied flowers on Viennese pastries. Really, though, violet can be dark and moody, especially when paired with its leaves (think of the knowing earthiness of Jean Patou 1000) or even elegantly futuristic (like Comme des Garçons + Stephen Jones's waft of a flying saucer crashed into a bed of violets).

Then, of course, there’s the classic gentleman’s violet as found in British shaving creams and old-fashioned colognes. Mona di Orio Violette Fumée Eau de Parfum Intense is a gentleman’s violet, but for the modern gentleman (or lady) whose desk is topped not by fountain pens but a MacBook Pro, and whose evening tipple is more likely to be small batch bourbon from Brooklyn than a Scotch whisky and soda.

Mona di Orio created Violette Fumée for her business partner, Jeroen Oude Songtoen, who continues to run Mona di Orio Parfums since di Orio’s death. In an email exchange in April when I was preparing to review Eau Absolue, he wrote, “This year we will launch the fragrance Mona created  for me, filled with my passions, likings, music, colors, films, history of fashion, etc. She made this some years ago. And now I will share it because it’s too precious to keep just for myself.”

Fans of Mona di Orio will recognize Violette Fumée as hers from the first dense, earthy sniff. At first, an herbaceous kick of almost mentholated lavender floats up. The perfume’s dank, mossy violets with their characteristic metallic edge are right behind it, cushioned by loam-scented violet leaves. A green, herbal core runs through the whole fragrance, but it isn’t the assertive lavender of a fougère that, for me at least, can make a perfume too masculine to feel comfortable in. Instead, it’s a slightly medicinal edge that sucks the preciousness right out of the violets.

I wouldn’t have smelled pipe tobacco in Violette Fumée if I hadn’t read it in the press release, and whether it’s the actual scent of tobacco or the mood of fragrant smoke drifting from a cherry wood pipe that I sense, it complements the violet well. As the fragrance wears, it warms and softens but still remains dense and almost telescoped, as many of Mona di Orio’s fragrances do. A few times when I wore it, a buzz of something like jasmine floated above the fragrance’s body, but not always. Violette Fumée lasts at least six hours on me and stays within my personal space.

Jeroen Oude Songtoen said the fragrance echoed some of his favorite things. What do you think they are? Judging from Violette Fumée, I’d guess his favorite color is grey-purple. I’d place his favorite fashion era as the 1930s, and his favorite film as Brideshead Revisited. But I’d put him in a perfectly modern condo with a well-used Jean Prouvé armchair, jazz on the stereo, and a stack of novels.