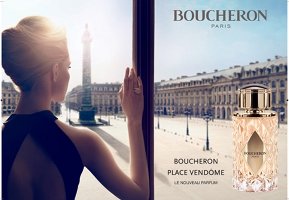 Place Vendôme is the latest fragrance from luxury jewelry house Boucheron, and it's their first under new licensing arrangements with InterParfums (they used to be with L'Oreal). It's a woody floriental named for the location of the brand's flagship store in Paris.

Place Vendôme Eau de Parfum* opens bright and citrusy, with a slight trail of orange blossom, and the usual pink pepper very much in evidence almost from the start. The heart is soft and velvety, and floral in the modern style. The press materials promise that "jasmine deploys its full floral power", but of course that is nonsense. If you are scared of indoles — or white flowers, or traditional oriental fragrances, or even any vague hint of skank — do rest assured that flowers are kept on the same tight leash here that they are in nearly every mainstream perfume these days. Still, there is orange blossom, and there is jasmine, and reportedly some peony, presumably to keep things fresh and light (other notes: honey, benzoin, cedar and rose).

As Place Vendôme dries down, it gets softer still, and the velvety finish eases into full (but not heavy) powder. The honey is light, as is the benzoin, but it is slightly sweet, and there's a nice musky warmth to the finish, which is otherwise woody and pale. In weight, it is medium-to-light; I should not think it would overwhelm in any but the hottest, most humid weather, nor, applied lightly, should it bother your co-workers or cellmates, or whatever.

Verdict: On the one hand, it's nicely done, even quite nicely done. It's pretty, easy to wear, and feminine. It smells grown up, and reasonably elegant — it will not embarrass its lovely cut glass bottle (see below) or its wearer. On the other hand, it doesn't smell all that distinctive, in fact, it smells an awful lot like too many other things to bother puzzling out. I would say of it pretty much what Angela said of B de Boucheron back in 2009: "restrained, feminine, bourgeois, and conventional — yet with an eye on current trends", which come to think of it, isn't all that different from what I said about Miss Boucheron back in 2007. 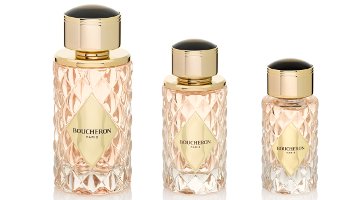 *I have not tried the Eau de Toilette, which appears to be available overseas but not in the US as of yet. It is reportedly quite different than the Eau de Parfum.