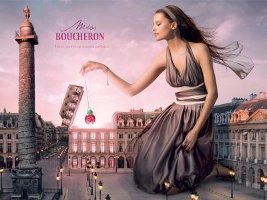 Miss Boucheron is the latest fragrance from the French jewelry house Boucheron, and like most everything else from everyone else, is positioned to attract younger consumers to the brand. In this case, the target market is said to be 25-35 year old women:

"This is for young women who can allow themselves certain liberties," said Jean-Christophe Bdos [sic, = Bedos], chief executive officer of Boucheron. "Miss Boucheron is there to upset the status quo. She is a modern woman." (via Women's Wear Daily, 3/2/2007)

As with yesterday's Coach, I'll start with the packaging. I love it. The regular Eau de Parfum bottle is PINK, and while I'm getting rather tired of pink perfumes, this one stands out for using hot pink instead of pastel-girly-pink, and the turquoise cap gives it somthing of a jaunty air. But it is the 10 ml refillable "jewel" bottle (shown) that really caught my eye. It is on a cord so you can wear it around your neck or around your wrist, and while I'll readily admit that I'm not likely to do either, it ranks awfully high on the cute factor. Useless, to be sure, but now I'd like all my favorite perfumes to be in 10 ml jewel-topped bottles on cords.

The fragrance itself is nice enough, although again as with yesterday's Coach scent, it doesn't quite live up to its presentation. It starts with peppered tropical fruits, sweet but not so much so as to bring on a toothache. The heart is sheer bright florals, dominated by rose but sheer and blended enough so that nothing really stands out on its own for more than a few minutes. The base is cool and pale, as is the current fashion, and while it stays fruity through much of its development, the end is much drier than the opening. The white suede contributes a bit of depth without smelling more than subtly animalic.

Miss Boucheron is cheerful and light, and more clean than not (it could pass as the summer limited edition flanker to some heavier scent), and as advertised, has a modern, youthful presence. It certainly smells "younger" and more casual than its forebears in the Boucheron line-up (Boucheron, Trouble, Jaipur, among others). Boucheron is calling it a "floral woody" fragrance, but it smells an awful lot like a fruity floral to me, and while it is far from a sugar-coated fruit concoction for tweens, anyone who has been paying attention to recent trends in fragrance will likely get a chuckle out of the notion of "upsetting the status quo" with pomegranate and pink pepper, both of which are very nearly ubiquitous these days.

So: a very wearable, perfectly pleasant scent, and a good match with its relatively tame moniker. It is nicer, to be sure, than much of what I've smelled on the fragrance counters this spring, so it seems almost churlish to point out that it is neither exciting nor innovative, but there it is. It doesn't exactly ooze personality. It does suit me considerably more than the heavier, sweeter Coach scent, and I wish I had one of the pretty bottles to swing around on its cord, but at $102 (at Nordstrom), I'm not likely to shell out for the privilege.

Boucheron Miss Boucheron is an Eau de Parfum, and is packaged in 50 and 100 ml spray bottles or in the refillable 10 ml bottle on a cord. A 50 ml refill bottle is also available, as are matching body products.