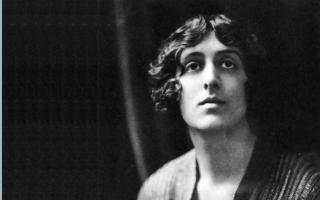 “…some we know to be dead even though they walk among us; some are not yet born though they go through all the forms of life; others are hundreds of years old though they call themselves thirty-six.”
— Orlando by Virginia Woolf

Imagine living for centuries and only aging 36 years. Oh, and starting out your existence as a man, then waking up one morning as a woman (thus experiencing “love” — sex — both ways). If that scenario intrigues you, and you are also amused by or interested in Old Queen Bess, cross-dressing, the struggle to write something “worthy,” exotic locales and gypsies..and much more…read Orlando.

Since the perfume, Orlando, inspired by Orlando the book, is by Jardins d’Écrivains (writers’ gardens), I will vouch for Virginia Woolf’s green-thumb connections — both her husband, Leonard, and the woman who inspired Orlando the book (Virginia Woolf’s one-time lover) Vita Sackville-West, were serious gardeners — Leonard on a small scale at Monk's House, Vita on a grand, aristocratic scale (visit Sissinghurst Castle, her house and garden in England, if you’re ever near it).

I like the Jardins d’Écrivains perfume line (I especially admire George), and Orlando has become my second-favorite from the collection.

Orlando starts off with the scent of dried orange peels “revived” by some peppery ginger juice and maybe some honey (warm notes)*; Orlando’s opening is opaque, but lively. As the fragrance develops, I can smell clove, patchouli and one of my all-time favorites, Peru balsam (also used in Jardins d’Écrivains George).

Overall, Orlando's notes create the aroma of an old-fashioned pomander or home-made (and VERY fragrant) potpourri (perhaps scenting a wood-paneled room or wooden trunk, for there is a sweet wood note in the fragrance). No doubt Woolf's Orlando inspirations, travel (as well as time travel) and the people, real and imagined, who influenced the novel, make me think, when I smell Orlando perfume — vintage (an understatement), country house and traveling trunk (with its nécessaire de toilette fully stocked with Eaux de cologne, lotions, powders and herbal medicines). Orlando reminds me of the scents I used to encounter as a child when I would visit Colonial Williamsburg: many of the homes there, stately or modest, displayed beautiful porcelain dishes or ginger jars full of pungent potpourri, and I remember buying spice cookies, ginger cakes and honey-flavored candy at a "reproduction" Colonial-era kitchen. Orlando's sweet ginger, clove and orange peel scents bring back the memories...and my appetite.

The final stage of Orlando smells great: a combination of a (now) liquor-y orange scent mixing with talc-y sweet amber. Orlando is not an “original” or quirky perfume, but a beautifully composed, classic fragrance, one I consider a comfort scent (but not, strictly speaking, a gourmand perfume thanks to the wood notes). Orlando has great lasting power and good sillage; it's (appropriately) unisex and, like the title character in Orlando, it's timeless, ageless in style.