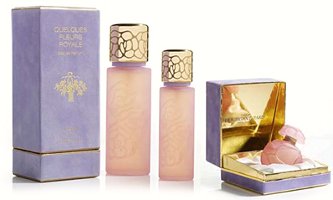 Last week I stopped by the Goodwill boutique and found a gorgeous old pair of Gucci loafers. Their black leather was thick and shiny, and the creases from use only made them feel more luxurious. Someone had lovingly resoled them, probably many times. An abstract version of Gucci’s classic horse bit strapped the toes.

Did I buy them? No. As beautiful as they were, the shoes didn’t suit me. They would have been right at home in a (literally) well-heeled matron’s closet, and someone with Margot Tenenbaum’s chic could have pulled them off, but they weren’t for me. That’s how I feel about Houbigant Quelques Fleurs Royale. It smells pretty and not cheap, but it belongs in someone else’s perfume cupboard.

Quelques Fleurs Royale was released in 2004, and according to the Houbigant website, it’s a modernized version of a Houbigant fragrance made for Princess Adelaïde d’Orléans in the beginning of 19th century. Its notes include blackcurrant, grapefruit, jasmine absolute, rose absolute, violet, tuberose absolute, beeswax absolute, sandalwood, cedarwood, vanilla and musk.

Quelques Fleurs Royale starts out with tart-juicy blackcurrant that fades as a powdery, jasmine-dominant floral heart takes over. Thanks to rose and violet, the flowers stay in second-soprano register — just high enough to be resolutely feminine but not screechy. Once the top notes vanish, Quelques Fleurs Royale is pretty, if predictable.

To me, Quelques Fleurs Royale would be a natural choice for an older woman with good manners and understated dress. She avoids controversy, glows in blush rose silk, and secretly reads romance novels, but not the smutty ones. Her grandchildren love to sit in her lap because she smells so good.

And now for an aside on royalty-inspired perfume. Fragrances named directly for royalty (like Rancé Josephine) or inspired by royals (to continue the Josephine theme, Parfum d’Empire Eau Suave) aren’t quite as numerous as perfumes named for celebrities, but there are plenty of them out there. Other perfume houses cash in on the glamour by tacking “Royale” or “Impériale” on the end of a fragrance’s name.

Well, I have an idea for a perfume named after royalty. Has anyone heard about the Princess Irina scandal that broke out last week? It turns out that a Romanian princess has been living with a retired sheriff in the eastern Oregon desert, and they may have been running a cockfighting ring. I’ve seen photos, and although Princess Irina may be correctly referred to as “Your Highness,” I’m telling you she drinks beer from a can and she’s no stranger to tater tots. Once the reality television show launches — surely we can expect one — Eau de Princess Irina must follow.