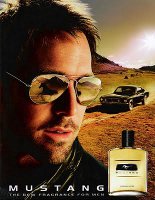 Hey guys, I didn’t forget about you during drugstore week! Today’s review is of Mustang for Men. Yes, a perfume named after a car. If Porsche, Bentley, Harley Davidson and Mercedes-Benz can have their own fragrances, Mustang might as well join the line-up. (Something tells me not to hold my breath for Suburu Justy Eau de Cologne.)

Mustang’s marketing materials say that the fragrance “embodies the spirit of the Mustang man while remaining true to the values of manhood and legend of the Mustang brand.” As far as the “values of manhood” go, I’ve only known two Mustang drivers. One was an accountant for the federal government who complained nonstop about his aching back. The other was my uncle, who now owns a dry cleaners in Sparks, Nevada, and he didn’t have the Mustang past his twenties. Neither man was known for tearing it up.

Then there’s the fact that Mustangs were originally marketed to women as a “secretary’s car.” Ads from the car’s first few years showed a woman in a tweed skirt and knees sock pondering her new ride. And remember what Charlie’s Angels drove? Bingo. Let’s not even get started on “Mustang Sally.”

Over the years, Mustangs — like Old Spice before it — were co-opted by men, and Mustang for Men reflects that. Few secretaries will be wearing this one. Mustang for Men, released in 2007, has notes of lavender, ginger, lemon, pipe tobacco, cedar wood, amber, fir balsam and patchouli and is labeled a “rugged oriental.” Whatever they call it, I like it.

“Rugged” is right on. Mustang is assertive and woven from thick swathes of fragrance notes. It feels more like a chunky mosaic of scent than a fine mixture. “Oriental” captures the fragrance’s tobacco and amber. I’d add “fougère” for Mustang’s dominating minty lavender, which is unexpectedly — and successfully, I think — set head-to-head with ginger and lemon peel.

Sweet pipe tobacco, wood, and amber warm Mustang’s heart, with barely discernible patchouli helping out. Still, the fragrance retains an unpredictable spicy freshness. Cedar can be strident and even hint at body odor, but it doesn’t solo here. Neither does fir balsam, although it fuels the fragrance’s masculine feel.

Mustang has massive sillage and lasts hours on my skin. I expected it to flatten to amber as it dried down, but it kept a strange and interesting herbal cast all the way to the end.

Mustang for Men may not work for every man, but my guess is that it rumbles like a finely tuned V-8 on the right man. (Ouch! Sorry.) I imagine it on a beefy guy who gives vice-like bear hugs. If you have the presence to pull off a demanding scent, Mustang is worth trying. It’s better than a lot of men’s fragrances I’ve smelled at triple the price.

Next up, I’d like to see a cologne named after a Ford Ranchero. What about you?