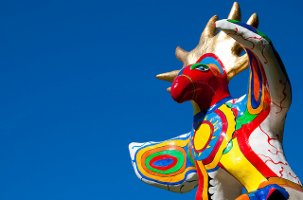 Every once in a while, a commenter will note that a particular whopper perfume “really blooms” in the heat. Someone might say, for instance, that Serge Lutens Chergui is great on a July afternoon. I’ve been skeptical. I figured the commenter probably has round-the-clock air conditioning and didn’t really have to deal with the smothering sillage. I’ve never been brave enough to try it myself.

Until last week. A heat wave descended on my hometown. In moderate Portland, “air conditioning” generally means setting up an air mattress in the basement and rolling down the car windows. I had taken the week off, so I didn’t even have the office’s chilled air as a refuge. It was the perfect opportunity to try wearing massive perfume in 90-plus degree temperatures.

Day one: Frédéric Malle Carnal Flower. As usual, for the first few minutes of wearing Carnal Flower, I swore I needed a half-gallon of it always at my disposal. Also as usual, by the time an hour was up I was over it. In humid heat, Carnal Flower trumpets the sweeter side of tuberose and gardenia, but it didn’t seem to swell as I’d feared. I spent the day seeing friends and nipping into (air conditioned) Goodwill, and no one edged away or commented on the volume of my perfume. If you like Carnal Flower in the cold, you’ll probably like it just as well in the heat.

Day two: Annick Goutal Songes. I was planning to try a big oriental, but Carnal Flower still clung to my skin, so instead I segued into Songes. Songes takes Carnal Flower’s big white flowers, turns them tropical, and adds a generous dose of vanilla. Even on a moderate day, Songes is as pulchritudinous as Elizabeth Taylor in her Senator Warner years, but I figured its island vibe would suit the heat. I was right. With the house's temperature now in the 80s, Songes still didn’t bring on nausea. It was especially nice after dark.

Day three: Guerlain Shalimar Eau de Toilette/Extrait. Vintage Shalimar Eau de Toilette was my favorite fragrance in the heat. It was as baroque and assertive as ever, but flat and cool as satin. The Eau de Toilette brought out Shalimar’s civet for a quick, glorious moment, as well as its lemon, but played down the thick amber-vanilla. I was enthusiastic enough about it to dab on some Extrait in the evening. The Extrait was warmer and more dense. Before bed I slapped on some Revlon Jean Naté straight from the refrigerator. Who knew it paired so well with Shalimar?

Day four: Comme des Garçons + Daphne Guinness Daphne. On my skin, Daphne flattened quickly into turpentine. Maybe incense doesn’t do as well in the heat. (Please comment if you’ve tried an incense-based fragrance on a humid summer day.) The temperature seemed to throw the fragrance all out of balance, and after a few hours it became annoying instead of intriguing. I’ll save Daphne for the fall and winter.

Day five: 10 Corso Como. I wanted to try something woody in the heat, and my vintage bottle of 10 Corso Como is loaded with sweet sandalwood. Plus, it’s big and shapely with oud and rose. This is the only perfume people complimented me on during the heat wave. I moved the bottle to the front of my collection as a reminder to wear it more, but ultimately its sweetness irritated me by mid-afternoon.

Conclusion: When I started out on this experiment, I anticipated that mega-sillage perfumes would be extra stifling in the heat. I didn’t find that to be true. But I’m not sure that the heat illuminated parts of the fragrances that I hadn’t experienced before. Also, heat seemed to amp up a perfume’s sweetness — or I had less of a stomach for it in the heat. Finally, the heat really made me appreciate the beauty of a well-crafted Eau de Toilette version of a fragrance.

After my experiment, I was happy to return to some sheer Eaux de Cologne, but I won’t be afraid to crack out the Guerlain Mitsouko or Serge Lutens Fumerie Turque if I feel the itch. I’ll never give up my refrigerated Jean Naté.

What about you? Do you ever wear big perfume in the heat?