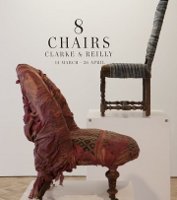 Gallery Libby Sellers in London is hosting 8 Chairs by Clarke & Reilly, an exhibit with accompanying fragrances by Azzi Glasser:

8 Chairs, an exhibition by the London-based creative team Clarke & Reilly, is a poetic travelogue detailing the plight and fate of eight specially sourced chairs as they made their way from the designer's studio, to Peckham then California and back to London again.

Clarke & Reilly, otherwise known as David Grocott and Bridget Dwyer (b. 1964, 1967), have been collaborating as an artist duo since 2005. Bringing together their backgrounds in fashion (Dwyer) and antique furniture (Grocott), they create unique objects that convey their nostalgic, romantic, and slightly eccentric aesthetic. 8 Chairs exemplifies this reverent attitude towards design as each of the historical chairs, selected to represent a specific character in the artists' minds, has been reinvented, often using period and bespoke fabrics. The redefined forms were then installed on the rooftop of a Peckham building to weather the icy winter before being transported to the scorching Californian desert.

The consequences of such extremes, all documented through film and photography, will be displayed in the Gallery alongside the altered chairs which have undergone one final tailoring process, informed by each chair's reaction to the whole experience.

To complement the experiential nature of the exhibition, and to try to capture the extreme conditions endured by the chairs, Clarke & Reilly have collaborated with leading perfumer Azzi Glasser to create a signature scent for the exhibition. In researching the base notes for her scent, Glasser drew heavily on the project information given to her by the designers but she also spent time with the chairs on their return to London - getting an understanding of the environments in which they had been placed and the consequences these locations had on the fabric, smell and structure of each chair. Such collaborations and emphasis on the sensorial side of our built environment are essential to Clarke & Reilly and will hopefully make for a truly unique exhibition experience.

The exhibit runs through April 26.