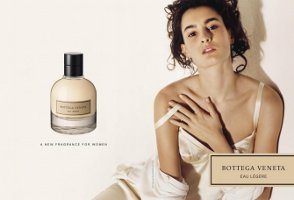 Where I live, this past weekend brought a few days of false spring. The sky shone rich azure, windows through the neighborhood flew open, and birds came out in legions, singing fiercely and hopping through the garden. I craved asparagus, fava beans, sorrel — and a lighter, fresher fragrance. It was the perfect time to crack out my sample of Bottega Veneta Eau Legère.

I’m a fan of the original Bottega Veneta and bought a bottle within a week of smelling it. It’s a jammy blend of apricot, suede, and patchouli that weaves a cashmere blanket of scent. Bottega Veneta has a definite presence, and it’s a warm, approachable, comforting aura I’m complimented on nearly every time I wear it. But I can’t imagine wearing it in warm weather. It’s just plain too thick.

Enter Eau Legère. Basically, Eau Legère is Bottega Veneta on spring break. I’m not talking about a Girls Gone Wild spring break with fruity drinks and hangovers, but a week in New York, maybe, with theater tickets and an apartment overlooking the budding trees in Central Park. Unlike, say, Cartier Baiser Volé Eau de Toilette which tweaks the Eau de Parfum's mood, Eau Legère maintains both Bottega Veneta’s signature and spirit. Eau Legère isn’t so much a playful version of Bottega Veneta as it is a slightly more crisp take on the original.

Eau Legère punches up Bottega Veneta’s high end with a wash of lime zest, fluffs its heart with gardenia, and cools its drydown with a neutral musk. To me, Eau Legère’s lime is where it diverges the most from the original. After a few minutes, the lime sinks into the composition, but you can still smell it for hours. Eau Legère’s gardenia is blended well enough to lend light and buzz to the fragrance without making it in the least a gardenia perfume. White flower phobes have nothing to fear here. I can't pick out the oak moss at all. As for Eau Legère’s musk, it’s not the soapy musk that transforms so many fragrances into bodywash smell-alikes. Instead, it lifts the sweet heft from Bottega Veneta’s drydown and cuts its patchouli. Still, few people would call Eau Legère sheer.

Eau Legère has moderate sillage and lasts nearly as long as the original on me — about six hours.

Maybe false spring is the perfect time of year for Eau Legère. The weather isn’t properly warm yet, but it’s past the time for gloves and knit caps. Sure, weeks of rain lie ahead, but now we’ve had a taste of the wakening Earth, and even if we build a fire to take off the chill, there's a vase of daffodils on the mantel. Eau Legère promises warm nights to come, even if when summer arrives you reach for another fragrance.