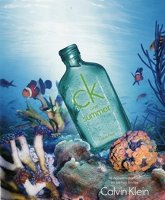 Calvin Klein CK One Summer 2013 will be available in 100 ml Eau de Toilette.

CK One Summer was developed by perfumer Harry Fremont; additional notes include crushed leaves and caraway.