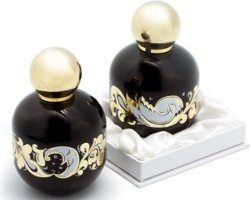 Enchanted Forest is the debut fragrance from niche line The Vagabond Prince, a new venture from the founders of the fragrance website Fragrantica.

The Vagabond Prince is an adventurer, a passionate explorer, a romantic dreamer. He stepped out of fairytales, you can find him in the folklore of every nation: the bravest character in a story, often foolhardy in the eyes of everyman, but still quick-witted enough to win. He travels, he fails, but he finds the strength for another fight, and he never relinquishes to anybody the mission of finding his happiness... He is a fabled symbol of human will for development. He is self-made.

Enchanted Forest is inspired by the endless sea of Russian forests and fairytales, as well as the most sensual ancient Slavic celebration named Kupala, rooted in the times of darkness, when all on the Earth knew its soul and its name (often too powerful to be uttered in vain or at all). French perfumer Bertrand Duchaufour, the famous creator of fragrances for L'Artisan Parfumeur, Comme des Garçons and Penhaligon's, built Enchanted Forest around black currant, the smell and taste of which are so beloved in Russia and many other countries where it grows.