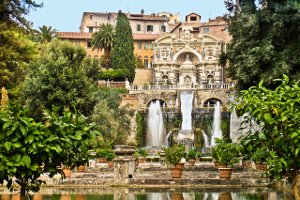 Until now, the Vero Profumo line had three fragrances: Onda, a mysterious herbal leather; Kiki, a fresh, bright lavender; and Rubj, a romantic, seductive orange blossom. Each perfume has a distinct personality, and each is different from the other. What would Vero Profumo's logical next fragrance be? A green chypre, of course. In true Vero Profumo fashion, Mito Eau de Parfum is styled as a recognizable, but not entirely predictable, member of the family.

The fountains and statues in the garden of Italy’s Villa d’Este inspired Swiss perfumer Vero Kern to create Mito. Mito’s notes feature citrus, magnolia, jasmine, galbanum, hyacinth, cypress and moss. I’ve never been to Villa d’Este, and maybe I’ve fallen victim to the power of suggestion, but to me Mito does evoke a grassy garden smelled over a twist of fresh lemon peel and peppery bergamot. Shade dapples the velvet-fine lawn, and shrubs and trees dominate the garden’s alleys. Mito’s jasmine and magnolia don’t take center stage, but they soften the crisp galbanum without sweetening it.

I’m used to thinking of green chypre Yves Saint Laurent Y as more green than floral, but it registers as ylang ylang heavy compared to Mito’s almost austerely citrus-stemmy scent. Givenchy III’s rose and wood — aspects of the fragrance I’d never noticed before — sweeten next to Mito. Mito doesn’t read to me as either particularly feminine or masculine. It's as gender neutral as a summer morning.

What sets Mito apart from most green chypres I've smelled is the quality of its materials. I found a bottle of Chloé L’Eau de Chloé at a thrift store and have been wearing it a lot lately and enjoying its old-fashioned rosy green chypre vibe. L’Eau de Chloé smells thin and flat next to Mito’s layers and texture. In Mito, the citrus feels like a chiffon veil over wet green with a viscous, piney hint giving it body. Mito’s moss adds soft, dirty depth. It’s tart and cool, pungent and soft, airy and substantial all at once.

Sadly, Mito only lasts about four hours on me. While it lasts, though, it radiates a substantial, but not thick, sillage.

What’s next for Vero Profumo? What would complement the palette she’s already created? I’d like to see her take on a woody fragrance. It’s hard to say what direction she’d go with it, but I know it would be special. 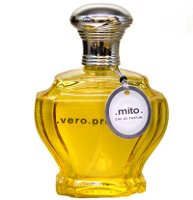 Vero Profumo Mito will be available in September as 50 ml Eau de Parfum, €145. For information on where to buy Mito, see Vero Profumo under Perfume Houses.