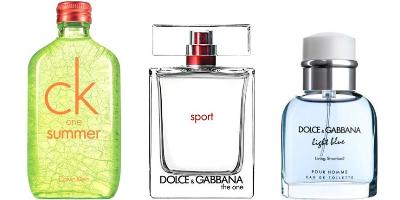 I don’t mind being thought of as the “niche man” at Now Smell This but that doesn’t mean I avoid (or dismiss) mainstream releases. I own and wear mainstream scents (imagine!) Right now, among my 50 or so “summer” perfumes in rotation, fifteen are mainstream. So, it’s time to tackle some of the recent department store launches — two limited editions and another (unnecessary) “sport” fragrance.

CK One Summer begins with sweet, minty cucumber (the usual “melon-like” character in these summer/beach/aquatic scenario-scents). Next up is a “nutty” dry note (driftwood?) that is joined by a sheer aquatic floral accord (probably the ‘water lotus’ combined with more melon and a “fresh” aquatic note). After this pleasant (and blatantly artificial-smelling) opening, those of you who know original CK One may recognize an approximation of that perfume in CK One Summer's dry-down. CK One Summer turns all soft and faded in the base.

I was hoping to really like this perfume since I want the green cracked-glass-effect bottle. I can enjoy an artificial-smelling, airy, ozone-flower-fruit perfume on a hot summer day, but CK One Summer 2012, though it’s downright complex compared to the scents reviewed below, doesn’t work for me (it feels aggressively “teen-y”).

Dolce & Gabbana The One Sport

Dolce & Gabbana The One Sport is described as a “fresh aromatic” scent; it features patchouli, ‘watery notes,’ cardamom, rosemary, musk and Sequoia Forest accord.

The One Sport begins with a harsh medicine-cabinet aroma; mouthwash, toothpaste, bandages, dandruff shampoo and muscle rub came to mind as I smelled it (is this intentional?) The patchouli in The One Sport is menthol-y and floats on an ocean of those dull “watery notes” we’ve smelled for decades at department store perfume counters. In the extreme dry-down, the perfume sweetens somewhat — I’ll give credit to the musk and Sequoia Forest accord. Overall, The One Sport is static…and dreary.

The One Sport Eau de Toilette costs $57 for 50 ml and $73 for 100 ml. It smells like D&G makes about $56 and $72 respectively on each bottle…truly, the juice smells dirt cheap. Of course, the lasting power and sillage are excellent!

Light Blue Living Stromboli opens with citrusy aquatic notes (very similar to The One Sport with some added pepper), and in the long-lasting mid-development, there’s harshness — accent on a “mineral aquatic” accord. I was so struck by the similarity, in mid-development, between Light Blue Living Stromboli and The One Sport I decided to wear them side by side. This experiment surprised me: it’s  almost as if the same juice is used in two “different” perfumes. Talk about a bargain! Two perfumes for the price of one (for the company anyway). To experiment further, I had a friend spray the perfumes on her arms and I had trouble telling them apart once the head notes had disappeared.

Both The One Sport and Light Blue Living Stromboli produce a cooling effect on skin — no doubt welcome on a hot day, but I’d rather rub some ice cubes over my body than wear either of these perfumes.