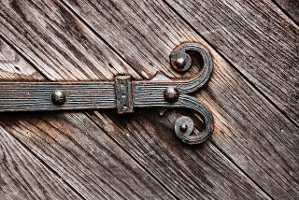 ...inspired by Angela's article The Leather Sisters, in which Christian Dior Diorling, Estée Lauder Azurée, Piguet Bandit, and L’Artisan Dzing! "lived together in a large house in a neighborhood that used to be popular before everyone moved across town to Fruity Floral".

The poll question: if you were a perfume, which one would you be, and why?

My aspirational choice would probably be either Ormonde Jayne Frangipani (drop dead beautiful) or Frederic Malle Le Parfum de Thérèse (sexy and powerful), or maybe even L'Artisan La Chasse aux Papillons (light and bubbly and young). But the reality is probably better expressed by the turpentine and raw wood of Monocle + Comme des Garçons Scent One: Hinoki (straightforward, can be prone to crankiness).

Note: image is The Hinge by scott1723 at flickr; some rights reserved.