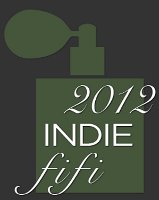 The Fragrance Foundation has announced the finalists for the first annual Indie Fifi Awards.* The winner will be announced at the Elements Showcase trade show on January 30. The finalists are:

Thirty-six fragrances from thirty brands had been entered into the competition; the complete list can be found on the Fragrance Foundation blog. The winner gets a $10,000 prize sponsored by Givaudan.

* Per the Fragrance Foundation, an indie brand “has been on the market for at least two years and is distributed in 1 to 25 doors”. If you missed it, you can see the announcement of the Indie award here.