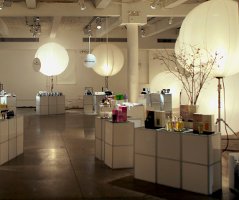 The Fragrance Foundation is partnering with the Elements Showcase fragrance trade show (shown above) to create a new award for indie fragrance brands* under the Fifi awards program:

As Elements Showcase prepares to host its second design and fragrance showcase on August 15th and 16th of this year, the founders are pleased to announce their partnership with The Fragrance Foundation to introduce a new FiFi® Award for Best ‘Indie’ Fragrance Brand at this August’s show. Brands will be able to sign up to receive nominating forms at the show and via the websites of Elements and the Foundation. The winner(s) will be announced at the Elements Showcase in January 2012 and again at the FiFi® Awards ceremony in the Spring of 2012.

While the Fragrance Foundation did give an award in the indie category in 2010 (and prior to that, recognized smaller brands in the "unique boutique" category), now the nominating and selection procedure will be outside of the "regular" Fifi awards, and there will be a special indie committee overseeing the process and providing outreach. The committee will include two bloggers, Victoria Frolova of Bois de Jasmin and Carrie Meredith of Eyeliner on a Cat, in addition to representatives from indie brands, retailers and The Fragrance Foundation (you can find a full list here).

* Per the Fragrance Foundation, an indie brand "has been on the market for at least two years and is distributed in 1 to 25 doors".