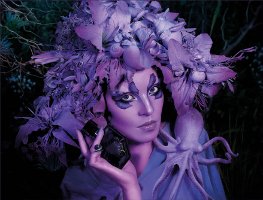 Illamasqua, a London-based cosmetics brand founded in 2008, has adopted the phrase "Make-up for your alter ego" as its slogan; as the Illamasqua website explains, "Illamasqua is for the bolder person hiding inside all of us. It is an act and an attitude. A symbol of tolerance. A celebration of idiosyncrasies." Illamasqua's cosmetics are boldly colored and densely formulated, almost like theatrical makeup for everyday use, and they have humorously subversive names. I was originally curious about the line because it drew on visual-cultural influences like 1920s Berlin, not to mention the fact that one of its art directors is David Vanian, former lead singer of The Damned.

Now, three years later, we are presented with Freak, Illamasqua's first fragrance. It is "a concoction of dangerously unconventional flowers brought together to celebrate the night," with a composition of black davana, opium flower, belladonna, poison hemlock, datura, queen of the night blossom, frankincense, oud, and myrrh. (The description on the Illamsaqua website also mentions a "burnt orange bloom base.") I originally read this list of notes with great interest and then I enjoyed watching the Freak video (even if the voiceover reminded me somewhat of the Princess Andromeda's recitation of the suitors' riddle in the original Clash of the Titans).

So, how does Freak smell? Disclosure: I have never smelled an actual opium flower (poppy) or queen of the night (night-blooming cereus), I've only read that davana has a fruity, rum-like scent, and I'm familiar with hemlock primarily from Ormonde Jayne Ormonde Woman, so I can't assess the accuracy of these notes in Freak. On me, this composition opens with a chilly bite: its introduction is a metallic-ozonic accord with an almost minty edge. This phase lasts for about ten minutes, after which it dissolves into a sheer, nondescript white floral heart with a fruity accent that might be the davana, but reads more as "purple berry" to my nose and brain. There's a faint wisp of smoke (the oud and incense?) and another light floral note that reminds me of violet, but the predominant note in the fragrance's developing heart and its base is a sharp synthetic musk. I'm wondering whether I might be anosmic to some aspect of Freak, because there almost seem to be gaps in the composition. The musk gradually turns quieter and more ragged, with a very faint "dirty" edge, like the cleaned-up patchouli that appears in so many commercial fragrances these days. Freak could easily be a "shared" fragrance: its medicinal-musk element is more masculine, and its fruit and florals are more traditionally feminine, but the overall result is a little too timid to shock in either direction.

I'm having much the same reaction to Freak that I had to the D&G Fragrance Anthology, which was an interesting concept but turned out to be much "exclusive" ado about nothing. Freak is about as freaky as Jo Malone Wild Bluebell is wild. It's not a terrible fragrance, just somewhat vague and thin and formulaic, other than that intriguing cold-air top note. (Maybe most of the budget went towards its fantastic bottle design?) "Daringly provocative" it is not, unless your previous fragrance diet has consisted strictly of candy-vanilla fragrances from a lower-end department store.

As you can tell, I can't help but feel disappointed in Freak. This is partly because it just doesn't do what it says it will do, and partly for more personal reasons. I remember my own alternative-culture days, in which my friends and I would spend hours dressing and applying makeup before we went out to see Peter Murphy or The Jesus & Mary Chain in concert. In those do-it-yourself, pre-internet days, we bought clothes at thrift stores and dyed them black, ordered Doc Martens from a London mail-order site advertised in the back of a music magazine, hoarded the Wet 'n' Wild black nail polish that we'd bought during the Halloween season, and performed our toilettes while listening to the "mix" cassettes that we had painstakingly assembled from vinyl records and late-night radio broadcasts. There certainly weren't any "alter ego" fragrances being marketed to us. 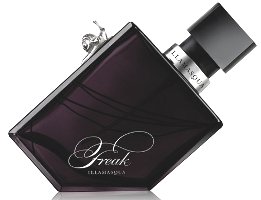 Maybe I'm just getting old and nostalgic, feeling (perhaps erroneously) that things are more precious when they're difficult to obtain or create. Maybe I should be happy for today's young goths and club kids and other alternative groups, who have so many consumer choices laid out before them. However, when there is such a busy marketplace competing to cater to their every need and desire, shouldn't the offerings be more compelling, more unusual? I just don't feel that Freak lives up to its promise. Instead, I'm guessing, would-be freaks will be happier with perfume oils ordered from the long-standing favorite Black Phoenix Alchemy Lab or any number of Etsy sellers who cater to darker or more theatrical tastes (Midnight Gypsy Alchemy and Wiggle Perfume, to name just two).  At the higher end of the price spectrum, I'd recommend fragrances like Serge Lutens Datura Noir (for a more interesting take on datura) and Bois de Violette, Siberian Snow from DS & Durga, or nearly anything from Comme des Garçons.

Now that I've thoroughly depressed myself, I'll end this review here. You'll be able to find me in my room, with the lights off. To cheer me up, let me know: have you tried any truly dark, mysterious, freak-y fragrances lately?

Illamasqua Freak is available as 75 ml Eau de Parfum ($90) through the Illamasqua or Sephora websites (but not in Sephora stores, which makes it difficult for Illamasqua fans to sample before purchasing). In the UK, it can be found at Selfridges.