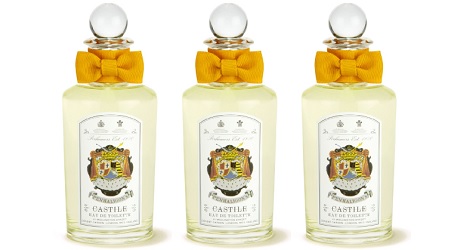 I first smelled Penhaligon's Castile scent when a friend who had traveled to London brought me back a box of three Castile soaps. I always chuckle (and then become wistful) when I think of Castile. The bars of soap in that gift box had been lightly nibbled by my friend's English bulldog, Bella. When I met Bella (right before pet-sitting her), I patted her rump...which was a HUGE no-no. She raised her hackles, barked loudly and LONG — facing me, then the ceiling, then me again — and circled the room menacingly, like a boxer assessing the opponent. When she calmed down, she ignored me. She wouldn't even take a treat from my fingers. I did not exist; I was crude and I had broken her protocols.

The early days of dog-sitting Bella were tense. When I sat in a chair or on the sofa, she would climb onto the backs of those and stare down at me. As I read on the floor, she would sit on the sofa. At night in bed, she insisted on sleeping behind my head on top of the pillows. It was a hot time of year and I didn't get much rest with my bulldog "bed bonnet" in place. If she couldn't tower over me using furniture, she would sit at the top of the stairs as if to say: "Beat this, dummy!" But: she achieved dominance quickly, and Bella and I had no further problems, just fun times. 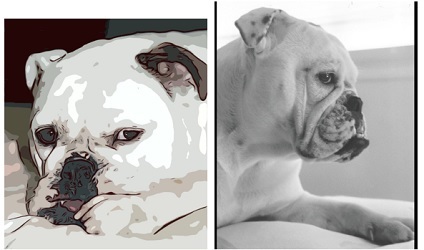 For years after my Castile gift, I bought the soap. It had a rich lather, was heavily perfumed and the fragrance always made me happy (and lasted on skin long after a shower). At some point, the soap was discontinued and I kept telling myself I should try the Castile perfume, before it, too, was "let go."

With Castile one is transported to Spanish hillsides via rich white blooms and zesty succulence. A citrus that spills its sun-born freshness in cascades of generous warmth. How does one capture a perfume so close to nature, so close to the sun? First, the vapour-soaked citrus leaves deliver their 'petitgrain' oil. The bitter orange blossoms are next gathered to make sweet honeyed neroli oil, a distillation of the delicate white flowers so dense that a few drops suffice. Blended with the yellow-coloured orange, the bergamot, the mix is uplifting. And now rose, musks and precious woods sign this fragrant breeze. Castile, the medieval Kingdom of new Spain, the country of castles and conquests. Hopefully only of the amorous kind….

Castile Eau de Toilette starts off with the aroma of vibrant orange blossoms that smell as if they had been drizzled with honey (perhaps that sweetness made Bella curious about Castile's taste). Neroli, petitgrain and dense bergamot add even more vitality and are joined in mid-development by two dry scents: clove and hay. Castile smells clean, but (whew!) without the assistance of cloying white musk. The head and heart notes of Castile perfume mimic the scent of the soap perfectly. Spicy-sweet orange blossom continues into the dry down, and I don't detect any woods or musk in the base (and that's fine by me).

I'm still sad Castile soap is no longer made, but the perfume is a good substitute. 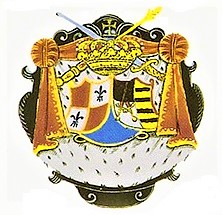 Bella moved away from Seattle — she was a cosmopolitan lady: Beverly Hills, Santa Monica, New York City. We stayed "in touch" via photos and the hilarious stories I was told describing her antics (she would pee into her Daddy's meticulously packed suitcase right before he left on a business trip). A girl's gotta do what she can to keep the men in her life in line.

Penhaligon's Castile Eau de Toilette is available in 100 ml for $144.

Note: middle images of Bella Rosenthal-Mehler by the author.