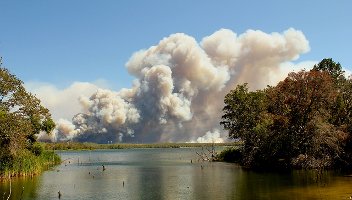 Back in the first week of September, a large part of the very large state of Texas was on fire. There was so much fire that the Texas Department of Transportation had a live fire map on their website. It showed many small animated flames scattered around the state, and one really enormous campfire-sized flame in Bastrop County, about 35 miles away from my home in Austin.

Local news compared the size of the Bastrop fire to the state of Connecticut. Its smoke plume was visible from space. Satellite photographs showed a dark point that widened as it traveled south until it trailed away in a ragged, fanned out fringe into the Gulf of Mexico. In Austin, we could see great black clouds of smoke on the horizon and, later, a gray-white sky. And of course, we could smell it.

Because scent is invisible to the naked eye, we tend to think of it as intangible. Once, I even saw an announcement for an academic forum on smell and architecture that referred to odor as "abstract."  But though we might not be able to hold an aroma in our hands, every time we smell something we've come in direct, intimate contact with tiny bits of it.

Smoke makes the physical presence of scent clear. (As does steam: In comics, odor is nearly always drawn as series of wavy lines rising up from the smelly thing, like vapor rising from a bowl of soup.)  Because smoke is made of water, carbon and particulate matter in addition to aromatic and other molecular compounds, most of the time we can see it. Even when we can’t, we can feel it scratching at our eyes, drying our mouths and throats and, if there’s enough of it, making our chests ache. Aromatics get a free ride on all that particulate matter — anyone who’s sat by a campfire, or who remembers the days when you could smoke in a bar, knows how thoroughly the scent of smoke can permeate hair and clothes.

The scratchy, clinging, insinuating nature of smoke allows us to turn its scent into a flavor. Before I moved to Texas, I found the smell of wood smoke haunting, autumnal — a sign of the first truly cold gray days of winter. Now it makes me think of barbecue — the scent of meat cooking, curing, really, in a smoky bath of the best concentrated flavor hardwood has to offer. (Smoke from softwood like pine smells great, but tastes terrible because it has high levels of the substances we distill into turpentine.)

If you have even a passing familiarity with aromachemicals, the stuff that makes wood smoke smell great is probably familiar to you. Wood is rich in vanillin, the central aromatic compound in vanilla. (As Luca Turin pointed out in Perfumes: the Guide, this accounts for the rich scent of used bookstores: Paper is wood pulp. As it decays it releases vanillin.) Wood smoke also smells of isoeugenol, a variant of which provided the scent of peppery cloves in many perfumes until it was recently restricted by IFRA. Guiacol (a relative of that mysterious "guaiac wood" note listed in some of my favorite perfumes?) and syringol provide, as far as I can tell from my limited research,1 the scent and flavor we most associate with "smokiness." When food scientist Harold McGee wants to approximate the scent of smoked meat for his oven-roasted ribs, he uses substances that contain these aromachemicals: smoked pimentón or chipotle pepper, cloves, cinnamon and vanilla.

The way the process of smoking releases and then captures these aromatics is not so different from the the steam distillation of aromatic oils. In steam distillation, the heat of the water vapor breaks down the cell walls of fragrant plant material. The volatile oils then rise up with the steam. When that water condenses, the oil rises to the top. (The fragrant leftover water is called a hydrosol — rose water, for example). In a barbecue pit, heat breaks down the wood’s cell walls and the volatile aromatics rise into the air where they are absorbed into the meat.

The crucial, delicious difference between smoke and steam is caramelization. The aromatics in wood are found primarily in lignin, the material that gives wood its stiff structure. But wood cells are mostly made up of cellulose and hemicellulose — relatives of glucose. When wood burns, its sugars brown and deepen in flavor more or less the way sugars in an onion do when you fry it (not to mention the sugar in cookie dough).

Hardwood is not the only thing that releases sweet and savory aromatics when it burns. The Wikipedia article on cooking with smoke reads like a found poem of flavor and ingenuity. In China, cooks smoke food over tea, sugar and spice. (And tea itself is smoked over wood smoke to create Lapsang souchong.) Some ham and bacon is smoked over corn cobs. (Originally left over from the corn fed to the pigs?) Barley smoked over peat is responsible for the smoky notes in whiskey, and in New Zealand “sawdust from the native manuka (tea tree) is commonly used for hot smoking fish.”  While over in Iceland, “dried sheep dung is used to cold smoke fish, lamb, mutton and whale.”

Of course, smoke can also smell like a warning against danger: Where there’s smoke there’s fire. And it can smell like poison — many materials become deadly when burned, and even woodsmoke contains carbon monoxide. While the Bastrop fire and others burned around the state, I am sure that for many smoke became the scent of fear and of loss. It was for that very reason that I felt the need to read more about smoke and its scent, even while my head ached from breathing it in, and from keeping up with the news of evacuations. I wanted to remember both sides of smoke — the cloud on the satellite photo and the plate of barbecue offered to a tired firefighter or a Bastrop resident in need of a taste of home.

1. The Wikipedia article I mention above is startlingly helpful — it was just what I needed. But I don't fully trust Wikipedia. So I cross-referenced its claims as best I could, partly through Harold McGee's books, New York Times column and website, partly by looking up the aromatic compounds in question, and partly by talking to the air quality engineer I mentioned in this post.  Mistakes in interpretation are my own. As usual, I welcome corrections from our knowledgeable readers.