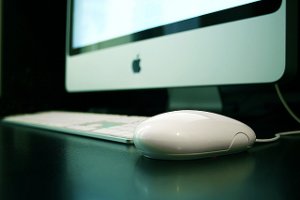 Technologically, I’m on the arrière garde. I don’t have a cell phone, my car is nearly 26 years old, and if I want to watch TV I have to fool around with a digital converter box. Facebook holds no appeal for me. Food just doesn’t taste as good from a microwave, so I don’t have one. Or a hair dryer or dishwasher. Besides my laptop — a workhorse MacBook Pro — and weekly posts on Now Smell This, I might as well set myself up as an exhibit at the Smithsonian entitled, “Life in 1994.”

For the most part, I wouldn’t have it any other way. But don’t even think about taking away my internet.

With Steve Jobs’ death and the arrival of my iPad, I’ve been pondering how the internet has changed the world for perfume enthusiasts. Ten years isn’t that long, really. But ten years ago I was an unanchored perfume lover at sea, buffeted by the conflicting information offered by sales associates and the slim, misleading perfume descriptions in magazines. If a sales associate waved his hand over the perfume counter and said, “Everything here is made of natural ingredients,” I believed him. Perfumers? Who were they? Didn’t Coco Chanel and Estée Lauder create their own perfumes?

Fragrance-wise, the internet opened up a whole new world. I first stumbled over perfume on the web when I read about Frédéric Malle in a magazine and looked up one of his fragrances online. I found the Editions de Parfums website and took its questionnaire to find out which of its perfumes would suit me. On a trip to Paris a few months later, I bought a bottle of Noir Epices. If it weren’t for the internet, I never would have found the boutique to begin with.

Later, about the time I (maybe foolishly) decided Noir Epices wasn’t for me, I found Makeupalley and learned about swapping. I listed the bottle and negotiated a trade with a sweet woman in Texas. At the time, with some embarrassment I told a friend I was doing this really weird thing and sending perfume to someone I didn’t even know.  I sure got over that fast. If it weren’t for the internet and swapping, I wouldn’t have smelled 99% of the fragrances I’ve smelled.

Then, of course, the internet opened the door to perfume blogs. Somehow through Makeupalley (I was too shy to join the fragrance boards, but I did drop in to read from time to time) I heard about Now Smell This. Back then, you could count perfume blogs on one hand. Through the blogs, my knowledge of perfume grew exponentially. Instead of smelling, say, Chanel Cuir de Russie and pondering its heart — could that be iris? — I could read what others had experienced and gain a whole new perspective.

I read Now Smell This every day, and when Robin posted a request for new writers, I replied right away. Besides boosting my knowledge of perfume, now the internet gave me the chance to meet a fabulous community of perfumistas everywhere from rural Kentucky to Beijing. Perfume lovers are some of the kindest, smartest people in my world now.

Besides what the internet has done for me personally, I think about how it's helped smaller perfume houses. Could niche perfumes even survive without the internet? I know I would never have heard of Parfum d’Empire, Tauer Perfumes, Etat Libre d’Orange, Aftelier, Mona di Orio and so many more if not for the web. Now, people like me can read about a perfume we can’t buy locally, then buy or swap for a sample, and purchase it online if it’s love. We're not stuck solely with the offerings at the mall.

All this talk about the internet is inspiring. Who knows? I might go wild and think about a car with power steering for my next vehicle. Or even set up a twitter account.

What is your internet perfume story? How did you find Now Smell This?

Note: top image is The almighty mouse by lastquest at flickr; some rights reserved.