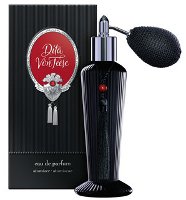 Burlesque model and actress Dita Von Teese will launch her debut fragrance, Dita Von Teese, in October, although it will not be introduced into the US until next year. Dita Von Teese was made under licensing arrangements with Luxess.

“I always wanted to be a grown woman that has something mysterious and elegant,” continued Von Teese. So notes evoking candy, fruit, vanilla or freshness were out. “I was really against those things because we’re constantly, as women, told that we should appeal to men, and you know men love vanilla and you know I just really don’t want to smell like a cake,” she said.

(via wwd, additional information via dita-von-teese.org)