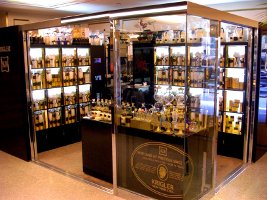 Krigler's history spans five generations and reaches from St. Petersburg to Berlin and Paris, from the French Riviera to New York. The company's only current United States location is an intimate glass box nestled into a corner of the landmark Plaza Hotel; and, in a bit of local déjà-vu, this shop marks Krigler's second residency at the Plaza. The Krigler family first operated a small retail venue within the Plaza from 1931 through the 1970s, catering to the hotel's glamorous guests and other members of Fifth Avenue's elite. After a period of dormancy, the company reopened in 2000 and returned to the Plaza in 2008, when the hotel had just completed its own extensive renovations.

The new-millennium image for Krigler seems to have been composed in the Penhaligon's/Creed mold: there's much emphasis on legacy, archival fragrance recipes and famous clientele. Krigler's packaging has an old-world European flair, and the well-stocked shelves of the Plaza boutique are decorated with framed black-and-white photos of classic Hollywood stars who wore its fragrances. Krigler's present-day shoppers include curious midtown browsers and hotel guests, visitors who remember Krigler affectionately from its earlier years at the Plaza, and world travelers familiar with the company from its boutique in Monte Carlo's Fairmont Hotel.

Krigler's current inventory comprises twenty fragrances, many culled from the company's historical records and several newly created over the past decade. Each one bears a numeral referring to the year it was originally released. There are masculine and feminine offerings, as well as a few scents that could be worn by either men or women. Some, like Manhattan Rose 44 (a dewy-fresh rose soliflore) and Relaxing Verbena 29 are bright and sparkling; others, such as Lovely Patchouly 55 (a rich amber-patchouli blend reportedly favored by Jacqueline Kennedy Onassis) and Oud for Highness 75, are darker and more intense. If you find a particular fragrance to suit your taste, you can also purchase it in the form of scented bar soaps and candles. A small house line of luxury skincare is also available.

Not to be missed: Sparkling Diamond 22, a Monte Carlo-themed fragrance based on notes of strawberries and champagne, complete with Swarovski crystals floating within its bottle

How to get there: To reach the Plaza's Concourse level, where Krigler is located, enter through the hotel's main door, pass to the left of the Palm Court atrium, and head down the rear flight of stairs; alternately, you can use the 58th Street entrance to the building.