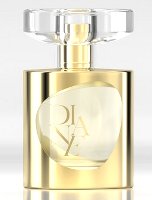 Diane von Furstenberg will launch Diane, a new woody floral fragrance for women, in October. The scent is meant to be "powerful and seductive, without being aggressive".

Diane was developed by perfumer Aurélien Guichard; notes include frangipani and violet.

Diane by Diane von Furstenberg will be available in 50 and 100 ml Eau de Parfum and in matching body products. (via wwd)

Update: additional notes include patchouli, myrrh and musk, and the fragrance will be available in both Eau de Toilette and Eau de Parfum.

Another update: see a review of Diane by Diane von Furstenberg.