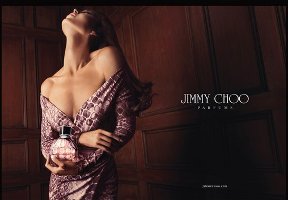 As I've mentioned here numerous times, I know little enough about fashion, and that includes shoes. Manolo Blahnik and Jimmy Choo, I take it, are the big names, information which probably filtered into my general consciousness via Sex and the City even though I only saw the show a handful of times. A quick check on Google reveals that neither of them have the famous red soles, though — that's apparently Christian Louboutin. There, now we've exhausted nearly everything I know about shoes.

So Jimmy Choo, as I understand it, does not own any portion of the company that bears his name, although he still designs some of the footwear. It's owned by a private equity company, and Tamara Mellon (who "starred" in the ad campaign for the perfume) runs it; she is presumably responsible for the run-of-the-mill modern fruity chypre (i.e., floriental) that now bears the Jimmy Choo name.

The opening is crisp for nanoseconds before sugar drowns it out, then it's sweet-and-then-some, with a hefty dose of pear (this must be my week for pear) and a bit of citrus. The heart starts out as a sweet-and-then-some floral blend — the notes say "tiger orchid" and "sweet toffee", sure, those are as likely as any  — but happily starts to dry out after about 30 minutes or so. They dry down is a darkish woody musk with clean patchouli, and just a bit of creamy caramel.

A few of the reviews on MakeupAlley call it loud, but there are louder such beasts (Gucci by Gucci, for one). Still, I agree that it isn't what I'd pick if I was going for subtlety.

If you're after a basic fruitchouli, Jimmy Choo might suit: it's reasonably well done and perfectly wearable. Plus, it's got a pretty bottle (inspired either by Murano glass or Viktor & Rolf Flowerbomb, depending on who you ask). There's nothing distinctive about the juice, but then, I'm not sure there is much you can do at this point to make fruitchouli distinctive; as March noted when she reviewed it earlier this week at Perfume Posse, it smells "so 2006".1 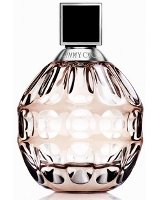 1. March reviewed Jimmy Choo from a magazine scent strip. I'll admit it, I was initially horrified. Then I thought, gosh, why not? If they're going to make a gazillionty-and-one smell-alike fragrances, must we really put all of them on skin?