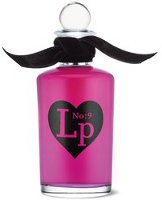 Since we're closing in on Valentine's Day, it seems like an appropriate moment to review Penhaligon's LP No. 9 for Women, which is characterized as "a truly intoxicating love potion...a sorcerer's recipe for irresistible female sensuality." This fragrance, and its counterpart LP No. 9 for Men, were originally released in 1998; they were discontinued in 2006 and made a re-appearance in late 2008. LP No. 9 for Women, which was reportedly brought back in its original formulation, was created by Christian Provenzano. Its composition is listed as having top notes of lemon, mandarin, lavender, bergamot, geranium, and tarragon; heart notes of rose, jasmine, and carnation; and base notes of cinnamon, cedar, patchouli, amber, musk, and vanilla.

LP No. 9's name, of course, is a nod to the classic pop song "Love Potion Number Nine," first recorded in 1959 by The Clovers and later covered by The Searchers (among others). Penhaligon's traditional bottle is trimmed with a twist of black velvet ribbon for LP No. 9, and the liquid within is a fascinating magenta hue. This appearance sets LP No. 9 apart from some of Penhaligon's earlier releases for women, which tend to have Edwardian-style labels and a garden-party aesthetic. But does LP No. 9 smell so very different from those more traditional fragrances? Yes and no. Its opening notes, which last for the better part of an hour, confused me at first. This dry, herbaceous accord, with lots of lavender and greenish notes — and, wait, is that oakmoss? — feels like a lighter interpretation of a traditional fougère, and it would not be out of place in Penhaligon's masculine fragrance range.

However, the rest of the fragrance is more recognizably feminine, like a stylish young woman who has cleverly paired a men's fedora with a slim, flowing dress. The mid-section of LP No. 9 seems to include a sneaky, unlisted cumin note that bridges the shift between the sharpness of the leaves-and-herbs top notes and the softer floral base of the fragrance. The dry down is a balance of creamy jasmine and fresh lily of the valley with cedar and a hint of clove. The lasting effect feels a bit "retro" to me, in a pleasing way: I'm suddenly remembering a bottle of fragrance that I kept concealed in my dresser drawer in the late 1980s, because while I loved its blend of white florals and clean woods, I was embarrassed by its somewhat mall-rat pedigree. (Camp Beverly Hills, if you absolutely must know. Now I have no secrets!)

All in all, I would dub LP No. 9 a "herbaceous floral," and I think it would appeal to fans of Penhaligon's Bluebell or Violetta, both of which combine spring-flower notes with layers of greenery and/or spice. It's quirkier than it sounds in its official description, and it's not what you might typically expect from a "romantic" fragrance (no noticeable rose, no tuberose, no gourmand notes). Sometimes, something unexpected is the most bewitching option.

Penhaligon's LP No. 9 for Women is available as 50 ml ($80) and 100 ml ($120) Eau de Toilette. For purchasing information, see the listing for Penhaligon's under Perfume Houses.