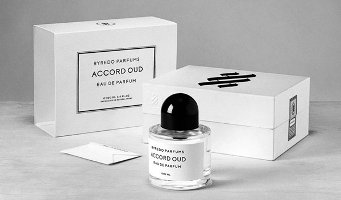 The duo OUD IMMORTEL and ACCORD OUD are both created around Oud, a certain type of wood that because of its use in traditional incense and perfume has gained great cultural significance and has gotten its existence recorded in one of the world's oldest written texts – the Sanskrit Vedas from India.

When the once light heartwood from the Aquilaria tree becomes infected with a specific type of mold, it defends itself by saturating its core with a dark, fragrant resin. This now dark wood, Oud or Agarwood holds a complex fragrance, resembling few or no other natural ingredients.

Oud Immortel ~ "A woody, fragrance where patchouli and papyrus are blended to bring smokiness. The tobacco leaves and moss ad [sic] depth and complexity while the incense and rosewood bring an elegant, ambery sillage." Additional notes include lemoncello, incense and cardamom.

Accord Oud (shown) ~ "Fresh accord of leather and blond woods with a bouquet of spices; cinnamon, saffron – all rounded up with a black plum accord." Additional notes include blackberry, rum, clary sage, patchouli and powdery musks.