Then, methought, the air grew denser, perfumed from an unseen censer
Swung by Seraphim whose foot-falls tinkled on the tufted floor...

The home fragrance company Paddywax recently launched its Library Collection, a suite of five scents inspired by authors. Needless to say, I couldn't resist the idea of these literary-olfactory tributes, so I ordered a few. The Edgar Allan Poe candle was ostensibly a gift for my husband, who is a longtime Poe admirer. However, he's really not all that interested in fragrance (despite my best efforts), so I've been the one basking in its glow and its scent, not to mention its clever packaging (labels that look like bookplates, and a travel tin, shown below, that could be used to hold small desk items when the candle is gone).

Paddywax's Edgar Allan Poe fragrance is a blend of "cardamom, absynthe, and sandalwood," and it turns out to be a warm, sweetish, spicy-woody scent that suits a late-autumn evening in a darkening room. I can't really detect an absinthe note — shouldn't it be sharp and greenish? — but that's all right, since Poe's supposed use of absinthe is treated with skepticism by scholars anyway. The cardamom note is comforting, and the sandalwood is smooth and lustrous. There's also an unexpected but distinct "stewed-fruit" aspect that adds a slightly syrupy, but seasonally appropriate, note to the mix. I do wish that Paddywax had gone a bit darker and weirder for Mr. Poe, but the brand is probably just a bit too mainstream for that approach; you might have to turn to Cire Trudon or Diptyque if you're seeking a candle with a more shadowy Symbolist feeling. 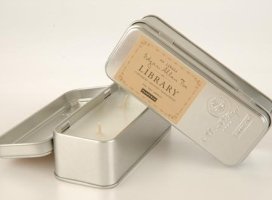 I can recall a few other fragranced products inspired by writers — Maître Parfumeur et Gantier's George Sand fragrance is one, and then there's Tocca's oddly inaccurate tribute to "the French novelist and courtesan" Colette. Come to think of it, Poe has already been honored by Tokyo Milk's Poe's Tobacco fragrance and candle, which I still haven't tried. I'm all in favor of this concept, as long as it's done well, since it combines two of my favorite pursuits. Paddywax's "library" also includes homages to Walt Whitman (leafy and grassy!), Jane Austen (lush flower garden), Henry David Thoreau (very back-to-nature), and Charles Dickens (holiday potpourri), for the different types of scent-loving bookworms on your own gift list.

Paddywax's Library Collection/Edgar Allan Poe line includes a 9 oz candle ($25), a travel tin candle ($8), and a 4 oz reed diffuser ($28); it is available at the Paddywax website and Amazon.