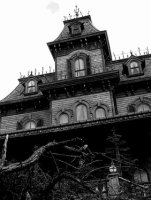 Since I’m inevitably going to be worried about flu germs (again) this fall and winter, I might as well carry some anti-bacterial hand gel with me; and if I’m going to carry a product everywhere I go, it might as well make me smile when I pull it out of my purse. This is why I scooped up a few Halloween-themed Anti-Bacterial “Pocket-Bacs” (as they are known) at Bath & Body Works when they first appeared in stores.

I’ve tried four of the Halloween-season scents available as Pocket-Bacs, and all of them were fun, if not exactly the kinds of scents I would choose for other body products or actual fragrances. Bat Bite, with its bat-image label, was an irresistible selection for the former Goth in me. Its scent is “apple" — more specifically, an intensely synthetic green-apple scent that reminds me somewhat disconcertingly of green-apple schnapps and “appletini” cocktails. This is also the strongest of the scents I tried, and it lingers for a while, so you (and everyone around you) had better enjoy it if you’re using it.

Vampire Blood is sure to appeal to young Twilight fans as well as, shall we say, more “mature” readers like myself who cut their teeth (pun intended) on Anne Rice novels. It’s tinted a satisfyingly vivid red, but its scent is much more subtle than Bat Bite; it’s nominally a “plum” fragrance, but it also has a strong hint of raspberry. And I’m going to pass Zombie Squad along to my husband, a lifelong devotee of horror films, now that I’ve tested it and enjoyed it. It’s a clear gel, so it's less eye-catching when it's used in public, and its “marshmallow” scent is actually a soft, powdery vanilla that doesn’t hit you over the head with a dessert-like effect.

My possible favorite in this group is Spider’s Web, partly for its creepy-cute label design (actually, they’re all nicely done), for its eerie gray color, and for its unexpectedly complete scent: the “licorice” of the description is there, like a piece of Good & Plenty candy, but there’s also something underneath, like a creamy coconut-milk-vanilla note, that fades away before I can quite identify it. This sounds messy, but it’s actually a light and sophisticated fragrance for an anti-bacterial gel.

If you’re curious about these Pocket-Bacs, don’t delay in getting yourself to a Bath & Body Works store; they seem to be popular items, and they’re strictly limited edition, seasonal “treats.”

Note: center image is Haunted House by darkpatator on flickr; some rights reserved.