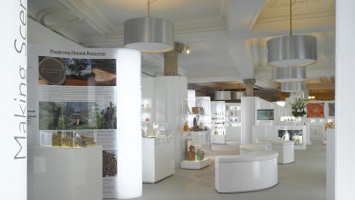 About the author: Nina is our guest shopper for London, and she not only kindly wrote up the Perfume Diaries exhibit for those of us who can't make it to London, she also took all of the images with the exception of the one just above, which is courtesy of Harrods.

Throughout September, Harrods is hosting a presentation of perfume through the ages. The Perfume Diaries is ‘an exhibition celebrating the past, present and future of the perfume industry.’

It’s on the fourth floor, in a long white space which has been put together with care and considerable style by Emma Jane Hockley (Harrods’ buyer for perfume and cosmetics — what a job!), and Harrods’ own Professeur de Parfums, Roja Dove. With this kind of clout, they’ve been able to pull in an amazing range of objects from all over the world.

Harrods generously invited perfume and beauty bloggers to a private viewing, and Robin equally generously allowed me to go instead of her. (And if you saw the quality of the patisserie offerings, you’d know how big a sacrifice this was.)

Racing in from a magazine interview, Roja Dove guided us round the exhibits. (He was exquisitely dressed in what we eventually decided was a Hermes silk shirt.) “I believe this is the important exhibition for years,” he said. “We managed to persuade many houses to dredge their archives for us, and some surprising things came to light. I filled in a lot of spaces in my own knowledge.” 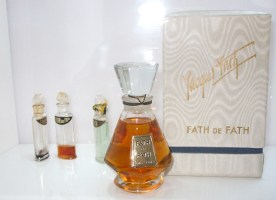 The Perfume Diaries looks at perfume in the context of its capacity to reflect the socio-economic and political circumstances of the day. It therefore makes sense that the exhibition is arranged by date. Curved white cabinets display individual decades or eras, with bottles and other artifacts held behind the kind of glass panel that look as if nothing is there at all, and you could pick the bottle up… Ah, if only.

The story, according to Roja Dove, starts in the 1800s, when perfume was originally used in the form of a ‘toile’, or cloth pad, that was impregnated with powdered scent and used for freshening up after sleeping. Later, a way was found to produce the same effect as a liquid, and the house of Lubin was the first to sell Eau de Toilette (get it?).

On display are some fascinating objects from this time, including a ‘civet horn’ — a ram’s horn that was packed with civet and sealed for transportation – and small pots containing musk pods. (One of these belongs to Roja Dove, who confirmed that, even well-wrapped, it drove his cat wild with interest.)

Perfumery sat somewhere between medicine and alchemy. Perfumes were sold in medicine bottles, the same packaging for everyone, whether you were a monarch or a mere wealthy person. (When it comes to monarchs, the Floris contributions are a triumph — on display is their original royal warrant and their ledger, with pages for ‘The King’ and ‘The Queen’.)

It took the marketing genius of François Coty to see the potential of perfume presentation. Rather than make use of a generic flacon, he asked a friendly neighbour to design a bottle for him. The friendly neighbour’s name was…Lalique. Coty was the first to put together perfume, bottle and box as a complete package, and we all know what that started.

Coty’s success was huge. The Henri Bendel store in New York was originally the Coty emporium, which gives an idea of how much they sold.

Coty defected to Baccarat at some point, and there is a huge Baccarat display housed in its own cabinet. Perfume, Roja Dove points out, was usually given to women by men, and the message was not always subtle. One Baccarat bottle housed a perfume called ‘Vierge Folle’ — foolish virgin. It was a best-seller. 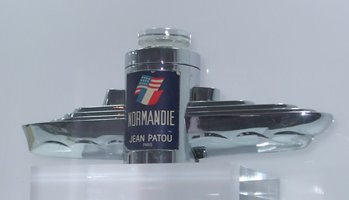 As the twentieth century brought new opportunities for travel, perfume reflected the zeitgeist. Perfumes celebrating air-travel were produced, such as En Avion and Vol de Nuit. On the French luxury liner Normandie, ship-shaped silver bottles of Jean Patou’s Normandie were placed on the bureau of every lady travelling First Class. On display is bottle No. 1. It belongs to Roja Dove.

By the time we reach the 1920s, perfume was beginning to become the domain of couturiers, and this is reflected in the exhibits. On display, and coveted by every woman present, is the original Miss Dior dress, whose shape inspired the amphora shape of the Miss Dior perfume bottles. (Or vice-versa; I was too busy dribbling to pay attention to the words at this point.) 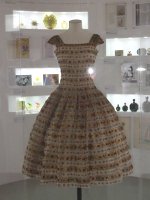 From a slightly later date, there is also a giant platform shoe by Ferragamo (“We had to ship it in from Shanghai,” says Emma Jayne.) The original (normal-sized) shoe is also on display, one of a pair worn by Judy Garland. It highlights something I hadn’t spotted before – that Ferragamo’s bottle designs always incorporate a platform. 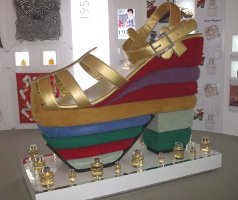 The exhibition moves through the power perfumes of the 1980s, to the inexorable rise of the celebrity scents. Roja Dove points out the growing trend towards scent ‘collections’, such as Tom Ford’s Private Blends. (On display is the top half of a suit belonging to Mr. Ford. It’s very snazzy, but I felt that all those soft-porn ad campaigns had led me to expect slightly larger suiting. How short is TF?)

One ironic aspect of the exhibition is the lack of smell. Everything is behind / under glass. Much as you long to handle that tiny bottle of Chanel No. 46, to see if you can detect a few last molecules of scent, it’s purely a visual experience. To combat this, the exhibition provides some sniffing boxes on the walls, with four stoppered (and unstealable) vials per box (see below). This is useful, although I felt that there were not nearly enough of them, considering how many perfumes are on display and under discussion. By a happy chance, most of the perfumes featured in sniffy-vials are also on sale elsewhere in the store. 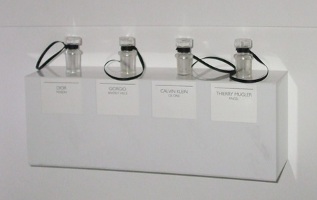 The exhibition includes several modern niche lines, such as Mona di Orio, Bond No. 9, Maison Francis Kurkdjian and Ormonde Jayne, most of them available elsewhere in the store. Surprisingly, there’s quite a lot about the rise of celebrity scents — you can sniff JLo’s Glow — although Harrods rarely carries these, as Roja Dove pointed out. (The recent Jennifer Aniston scent is a rare exception.) Obviously, space is limited and not everything can be included, but there is a sense that there has been a compromise involving expediency (brands who co-operated), commercial interests (houses whose goods Harrods sell), and taste (Roja must have had a heavy influence on the selection). 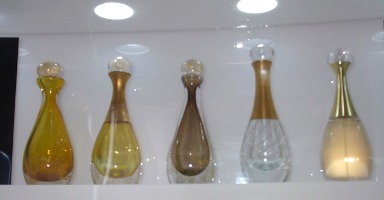 For bottle fans, the exhibition is swoonworthy. There are several displays showing the evolution of bottle design, such as those for Poison and J’adore (see above). The Shalimar bottles, including one of the originals, is stunning. (Did you know that the blue caps on the first bottles incorporated mercury? Apparently that idea didn’t last for long.) The latest design, by Jade Jagger, is a lot more attractive than I expected. 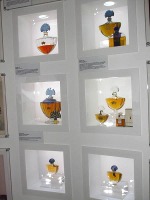 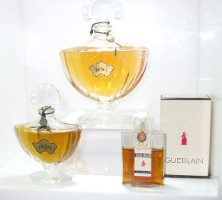 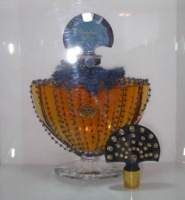 (I also learned that, for a while, Shalimar was known in Britain as No. 90, No.91, or No. 92. This was on account of there being a perfume house called Dubarry, in Hove, England, who made a hand-lotion called Shalimar. Guerlain wanted no confusion, and as those numbers were already stamped on all Shalimar boxes, the number became the name.)

Anyone interested in perfume adverts will have fun moving through the original modest drawings that told you nothing at all about the perfume, to the dayglo display for Giorgio. 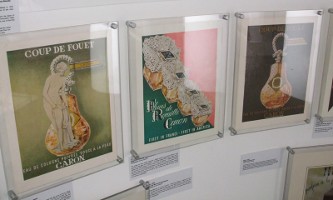 There’s also an iPerfumer facility, hosted by the fragrance & flavor company Givaudan, which allows you to select from a database of 4000 ingredients to work out your perfect perfume.

This being Harrods, the catering was out of this world. We were greeted by gloved butlers holding silver trays of sparkling elderflower spritzers, each with a tropical blossom floating in the bubbles. Later there were fruit tartlets (‘fruit’ and ‘tartlets’ doesn’t do them justice), layered mousses scented with orange blossom and eaten via a squeezy pipette, and chocolate fondant with glazed cherries wrapped into dark chocolate casings. Grant Osborne of Basenotes and I made perfect pigs of ourselves, leaving with chocolate stains up to the hairline, I fear. Apparently these delicacies are available as part of the Perfume Diaries Tea, every day throughout the exhibition, so I feel that sampling them was a matter of duty. I mean, you wouldn’t want to pay good money for naff food, would you? (Pay anything. They’re worth it.) 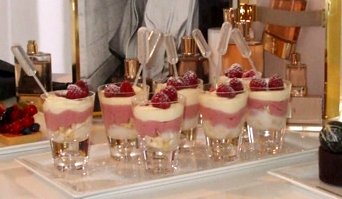 The exhibition runs till October 2nd, which seems an agonisingly short time, considering how much time has been put into creating it all. It would be wonderful in a place like the V&A, or as a travelling exhibit sent round the world’s great department stores. Even the most scent-nerdy person would find plenty to learn that they didn’t already know, I’m sure.

Naturally, I played the Bill Bryson game where you pretend that you’re allowed to take a single item home with you. Having agonised over the Guerlain bottles, and the half-full bottle of original En Avion, I’m afraid I made a choice for which, as a perfume-lover, I should be thoroughly ashamed.

If I could smuggle home anything, it would be the Dior dress.