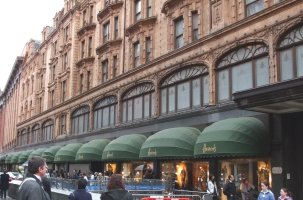 Well, if you had limited perfume-sniffin’ time in London, there is only one store to choose…and that’s Harrods.

I sometimes think of it as ‘Horrids’, not because it’s an unpleasant place — it isn’t by any means — but because it’s just so HUGE and so busy. There are four and a half large halls on the ground floor devoted to perfume and cosmetics. It’s big enough to justify some companies having extra counter locations; there are two Serge Lutens counters, two Jo Malones, two Hermès, often three Estée Lauders… You need stamina and flat shoes for Harrods.

And that’s not counting Roja Dove’s unmissable Haute Parfumerie. This is not dauntingly massive, but it is on the fifth floor, which is a lot of escalator riding up and down. In the interests of space, I’ll report on the Haute Parfumerie at a later date.

So, assuming you’ve got your comfy footwear on, and plenty of bottled water, let’s brave the corner door on Knightsbridge…

First up is the Lifestyle & Beauty Hall, which hosts BeneFit, Kiehls, MAC, Nars, and usually displays of fragrances which are fairly new and girly.

If you carry on through this hall, you reach the ‘Room of Luxury’. This is mainly devoted to designer accessories, but the important area for perfumistas is the Hermès section. This is where the Hermessences are displayed and sold — they’re not available at the other Hermès counter.

Turn left from the ‘Room of Luxury’, and you’re in The Big One — the Egyptian Hall. This is the main perfume section; and it has more Sales Assistants per square yard than any other retail space in London. It’s impossible to get anywhere near a counter without at an assistant sliding sideways at speed towards you. They’re not aggressive, though, and are often reasonably well-informed. 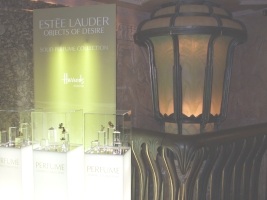 Note that Harrods isn’t too proud to stock Britney and Paris; and even the Beckhams. To find Mr. and Mrs. Posh, though, you’ll have to go on to the Cosmetics Hall. In order to get to the Cosmetics Hall, you go through one of two Egyptian-style lobbies with huge lamps. These are the places where new lines are often launched, so it’s a good idea to visit them both. For the last few months, the left-hand lobby has been displaying beautiful Estée Lauder solid perfume compacts; there are far more designs than EL were selling publicly, and some are certainly exclusive to Harrods.

Note: L’Artisan is no longer carried by Harrods.

From Christmas to end-January, the Harrods Sale makes the store even more frenetic than normal. Some lines are shoved aside altogether to make way for heaped piles of sale stock.

Not to be missed: the rest of Harrods, especially the Food Hall. The Ladurée shop selling those exquisite macaroons. And, of course, Roja Dove’s Haute Parfumerie on the fifth floor.

Nearby: There’s a SpaceNK right opposite the side door of Harrods on Hans Crescent, and Harvey Nichols just a few minutes east along Knightsbridge.

Walking west from Hyde Park Corner, it’s about a half a mile along the south side of Knightsbridge. By tube: take the Piccadilly line to Knightsbridge. When you emerge onto the concourse, there are two exits, marked ‘Harvey Nichols’ and ‘Harrods’. Both deposit you right outside the stores.