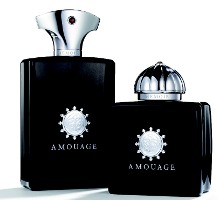 Amouage will launch Memoir Man and Memoir Woman at the end of September:

Inspired by the decadent mien and genius of the 19th Century French poet, Charles Baudelaire and the German philosophy of the doppelganger, Amouage Creative Director Christopher Chong, embarks on a deep and inquisitive voyage to unlock the unfathomable mysteries that reside within human nature. He expresses these influences by coalescing the provoking and potent ingredient of Absinth with other floral and wood accords to evoke a sombre mood.

Incarnated from the introspective pages of Baudelaire’s volume of poetry Les Fleurs du Mal (Flowers of Evil), Chong’s Memoir Man seeks to uncover his identity by seeking the underworld where he meets his other self and alter ego, the Black Swan. In this emporium of vice and damnation, the anguish, the unwanted, the dark, the haunting and the unmentionable are all beauty of the truth.

Represented as the female gender in this story, the Black Swan is Memoir Woman; she is him and he is her. Hauntingly, they come together as one representing each other’s past, present and future in which they mimic each other’s sorrow and pain. They are separated and reunited by the memoir they share, which Chong constructs in these philosophical and mesmerizing fragrances by piecing together contradictory fragments of accords.

Amouage Memoir Man and Memoir Woman will be available in 50 and 100 ml Eau de Parfum. (via press release)

Another update: see a review of Amouage Memoir Man and another of Memoir Woman.