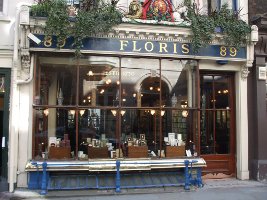 For Floris, we’re back on Jermyn Street, that bastion of male elegance tucked quietly behind Piccadilly.

Floris have been scenting the gentry since 1730. What’s more, they’ve been doing it from this very shop at 89 Jermyn Street, through wars and blitzes. “There are ghosts here,” says assistant Creative Manager Max Murgia.

It’s a dark but spacious shop. Many perfumeries in London are dinky, but Floris is big enough to accommodate a hundred or so shoppers in the scrum of the post-Christmas sale. The goods are displayed in cabinets made of Spanish mahogany, according to Max; they came from the Great Exhibition of 1861, held at the Crystal Palace.

Quintessentially English, Floris was in fact founded by a Spaniard, Juan Famenias Floris. It began as a barber’s shop, as so many men’s toiletries companies did, and by the 19th Century was catering to the chins of members of the Royal Family. The shop is peppered with Royal warrants, which are carved and painted wooden crests with the insignia of a particular Royal personage shown. It’s still family-owned, and continues its relationship with the Royals, as we’ll see below.

“We get a lot of Japanese and Italian customers,” says Max. “I think it may be to do with the Royal connection.” 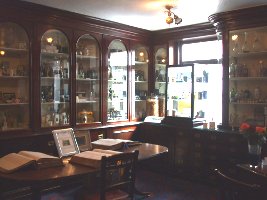 Tucked away at the back of the shop is the Museum (see image above), not normally open to the public, but well worth persuading someone to unlock for you. It was originally a sitting-room for wealthy clients, and seems to have little changed since the 19th Century. Don’t miss the beautiful etched glass windows at the back. One pane was destroyed by a bomb in the Second World War, and nice though the replacement is, it’s not as pretty as the originals that remain. There’s an antique desk and chair, with a white lab coat draped over the seatback, and bottles and droppers arranged on the desk. This is the working desk of Floris’ in-house nose, Shelagh Foyle, and where she composes bespoke fragrances for current clients.

Underneath the shop are cellars and vaults that reach under Jermyn Street, and where stock is still kept. Max showed me the dumb-waiter hidden in a carved cupboard, complete with the original rope-pull and platform.

“They would clean the money downstairs, and send the change back up perfumed and pressed,” he explains. “Most ladies wore white gloves, which would get very dirty touching ‘unlaundered’ money, so the notes were scented and ironed. We still use the padded velvet salvers when we’re giving back change, although they’re not all the original old ones — many of them have been stolen by customers over the years!”

Floris products are widely available in the UK, although most outlets will stock only a tiny subset of the range. It’s a bit of a shock to see so many Floris scents in one place, including many that you wouldn’t see anywhere but here. As well as toiletries, candles, home and personal fragrances, there are also bottles, atomisers and shaving equipment. There’s a large section devoted to a new range based on lavender from Prince Charles’ estate at Highgrove — there’s a strong relationship between the Prince of Wales and Floris.

Despite its gentlemanly image, Floris products are more designed for women than for men, and the male scents are classified ‘unisex’ in the catalogue. Mainly they’re florals and citruses, although there is a spicier slant to the newer lines.

“Sadly, we’ve had to discontinue several scents,” says Max, “because of the new EU restrictions on the ingredients. ‘Malmaison’ has been discontinued because it contained more clove oil than was allowed. We’ve also got the last of the ‘Stephanotis’ here; it was created in 1734, but it won’t be remade because of the jasmine content. It’s very sad.”

Best-sellers: “We’ve been selling a lot of Bouquet de la Reine recently, and also Special No. 127.”

Nearby: St. James Church (entrance on Piccadilly) offers lunchtime recitals, but also hosts an Antiques and Collectibles Market on Tuesdays from 10am-6pm, and an Arts and Crafts Market on Wednesdays to Saturdays 11am-6pm.

Czech & Speake is almost directly opposite, as is the back entrance of Fortnum & Mason.

Getting there: the nearest tube is Piccadilly Circus. Head for the Haymarket exit.