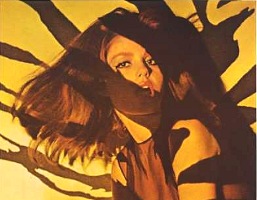 The idea of having a signature scent attracts me. I love thinking that when someone catches a whisper of Guerlain Vol de Nuit he thinks of me, or that my friends associate me with the warm, entrancing aroma left on my coat or suffusing my bedroom. But hey, that's not going to happen. I haven't counted lately, but my number of "signature" scents is probably pushing 100.

Now, though, I have a new justification. When I see someone's eyes start to pop at the sight of my perfume cabinet, I have the perfect reply. "Of course I have lots of perfume," I'll say. "Why? For 'enrichment', of course."

To explain, let me take a step back. I have a friend, Ann Littlewood, who used to be a zookeeper. Now she writes terrific mystery novels that take place in the fictional Finley Memorial Zoo. When she heard I like perfume, she mentioned she used to spray fragrance in the tigers' dens at the zoo. I asked her what perfume she sprayed, and why, and she sent me an answer by email:

Angie, It's very common for zoo keepers to use perfume for what is called "enrichment," which is some sort of fun or mild challenge for the animals to avoid boredom and keep them mentally stimulated. Many animals are very responsive to unusual scents and perfume (or cologne or perfumed magazine inserts) are used. For example, a keeper might spray a perfume on a log while cleaning the tiger enclosure. The animal is released from the night den and sniffs around as usual. OMG! WTF?? The cat will sniff, rub his/her face on it, and sometimes roll on the ground or claw at the smell. It can be very engaging. Keepers are careful not to use any particular scent too often, so it stays interesting. Keepers have many other tricks, such as frozen "blood sicles", sprinkling zebra poop around, and various toys.

She said the zoo she worked at used Mary Kay Angelfire, but the tigers at the Minnesota Zoo are partial to Calvin Klein Obsession and Revlon Charlie. Apparently, not just tigers, but raccoons, skunks, weasels, lizards, badgers, and snakes, and other animals enjoy a little scented distraction. The Fort Worth Zoo's "Enrichment Online" site touts perfume enrichment as a cheap way to entertain animals. They estimate it costs one to ten dollars (which at least explains Charlie) and doesn't hurt the animal's health.

We're used to comparing ourselves to animals. We refer to offices as "cubicle farms," to some men as "wolves," messy eaters as "pigs," and you can make the rest of the connections to bears, beavers, monkeys, horses, rats, jackasses, etc. Maybe we have more freedom than animals in a zoo. But think about it: considering the few of us who really take advantage of that freedom, we may as well live in a managed habitat. I know too often I'm stuck in my same routine of work, dog walks, dinner, and bed. A little enrichment is welcome indeed.

I'll pass by the blood sicles and zebra poop — and while I'm at it Obsession and Charlie, too— and go straight for my favorite niche perfume houses. (Who knows? Maybe my greater selectivity will head off the skunks and weasels.) And did you see the part in Ann's email where she said zookeepers avoid using a particular scent too often? Each morning when I gaze into my crowded perfume cabinet I'll think about how I'm going to enrich myself that day.

A parting word to zookeepers: for another cheap thrill try Dana Tabu. And for the big cats, I bet you can't go wrong with Fabergé Tigress.